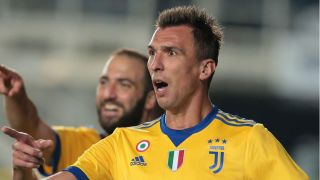 Mario Mandzukic is ready to feature for Juventus against Lazio on Saturday and head coach Massimiliano Allegri cautioned anyone against telling the forward otherwise.

Mandzukic sustained a knock to the ankle while away on international duty with Croatia but played through the pain in Monday's 2-0 win over Ukraine.

And Allegri insists the 31-year-old is bullish over his prospects of doing so again as the Serie A champions aim to return to winning ways, having been pegged back to a 2-2 draw at Atalanta last time out.

"No, don't tell Mandzukic that he's injured, that he's got a knock – if you do that he'll get angry," the head coach told a pre-match news conference, where he confirmed Sami Khedira was available and fellow midfielder Miralem Pjanic would not be risked before Wednesday's Champions League clash with Sporting CP.

"He's back and he's fine. I don't think it was anything too serious with Croatia. He can play – he trained really well."

The former Real Madrid and Napoli striker was on target in Juve's previous two matches and Allegri backed him to hit prime form with the campaign now in full swing.

"Higuain will have a good month, he's very motivated and in great condition," he said.

"He aims to play at the World Cup and in order to do so he must have a good season."

Juve suffered a last-gasp 3-2 defeat to Lazio in the Supercoppa Italiana in August in a performance that left Allegri deeply unhappy despite Paulo Dybala's brace launching a belated fightback.

The performance featured lapses that the ex-AC Milan boss believes are yet to be fully eliminated – as evidenced by Atalanta's second-half resurgence in Bergamo.

"Lazio will be a difficult game, but even beyond tomorrow we need to make a big leap to tackle the season in the best way and be competitive in March," Allegri explained.

"We need to get rid of those moments which happened after the 2-0 against Sassuolo [Juve eventually won 3-1], at 2-0 after half-time against Torino - when we conceded three free-kicks on the flank - and in Bergamo, when we stopped playing as well as defending.

"These are the moments of the game we need to improve, because otherwise we risk throwing points away during the season.

"The Supercoppa was a strange match, because it was decided on the counter-attacks. In the last half-hour the team did well, but at the same time I remember the Lazio goalkeeper had the ball and four turned their shoulders, so there was less attention.

"That will make the difference this year because of the teams we're up against."

Juventus sit two points behind Napoli at the summit ahead of a mouthwatering weekend in Serie A, with the leaders travelling to Roma on Saturday before the first Milan derby of the campaign on Sunday.