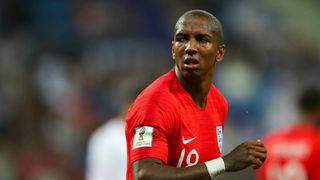 Ashley Young would put his hand up if England's World Cup clash with Colombia on Tuesday goes to penalties.

Young was one of two England players - Ashley Cole being the other - who missed as the Three Lions exited Euro 2012 in a shootout against Italy, but the Manchester United full-back would have no qualms about volunteering again at Spartak Stadium.

"Of course, I will put my name forward," he said.

"I have the confidence to step up and take one. If it goes that way I'll put my hand up and want to take one.

"We have practised them and I have confidence in my ability to score one."

England are no strangers to shootout woe at major tournaments but manager Gareth Southgate says his players are "ready" for that eventuality.

"We've been through various drills to prepare," he said.

"If we get to that point we know our ranking of players. As we've seen over a number of years, certain players take more than others.

"We are prepared but there is a lot of football before that point, the primary focus is what happens during the flow of the game but if it happens we're ready."

Young was excited at the possibility of England advancing to the quarter-finals in Russia, where they would meet either Switzerland or Sweden.

He added: "As a squad, you want to write your own story and history but we can't look too far ahead, we have a massive game on Tuesday.

"We need to put on a big performance and get ourselves through. We are just concentrating on Tuesday's game."