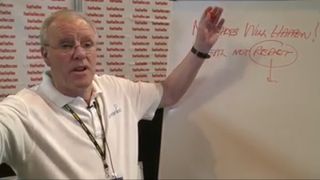 A poor first touch, a misplaced pass or an unsuccessful tackle can rock a player's confidence.

Like a disease the mishap replays over and over again in the player's mind, increasing his anxiety and frustration.

Fear replaces confidence, causing a succession of mistakes. Nerves debilitate with the power of kryptonite and self belief does for a football what spinach does for Popeye.

But, how do you restore your powers of confidence after a mistake? Have a policy for dealing with the error and don't react, says former Manchester United and England psychologist Bill Beswick.

For more tips see:
How to deal with a mouthy player
Managing the pressures of a penalty
Get the best out of a big ego
Dealing with the red mist
Keeping focus in the last 15 minutes
Dealing with a dressing room feud