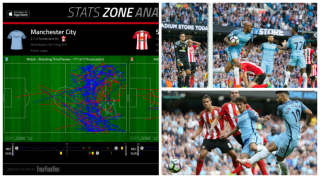 Manchester City squeaked out a 2-1 win in their first home game on Saturday evening, but they were far from convincing against a typically dogged David Moyes side. Jesus Navas effectively won the bout, as his deflected cross bounced off the unfortunate Paddy McNair and into the Black Cats' net.

But plenty of football watchers will have been interested to see how Pep Guardiola set up his side, and there was plenty of customary tactical innovation from the former Bayern boss.

For a start there were several surprises in his starting XI, as Joe Hart was relegated to the bench (due to his weakness at keeping possession when kicking the ball, apparently), Aleksandar Kolarov was given a place in central defence and David Silva played a more central role with width provided from Nolito and Raheem Sterling.

John Stones was given his debut at the back, and as he and Fernandinho exchanged passes it was no surprise to see Pep's team dominate the ball and push Sunderland back.

However, as many noticed, City's full-backs were playing very centrally when the home side were in possession. Both Bacary Sagna and Gael Clichy were almost moving into positions directly ahead of centre-backs Kolarov and Stones.

Comparing Caballero's dstribution from the back with Hart's (from the home game against Sunderland last season) it's obvious that the Englishman's propensity to hoof the ball into midfield doesn't marry up with the way a Guardiola team should play out from the back. So long, Joe!

Looking at where the full-backs received the ball it shows that while Sagna often stayed wide Clichy moved centrally very often. Reportedly, this is due to Guardiola wishing to create clear passing lanes to the City wingers. By moving Clichy away from the left-back position it would enable more direct passes to Nolito in theory.

#MCFC 1-0 #SAFC (via @StatsZonehttps://t.co/sVmdRgCQ6s): Where Pep's full-backs have received the ball so far. pic.twitter.com/6AeT7kroNq

Meanwhile, when City had the ball Fernandinho continually dropped back to enable the full-backs to push forwards and infield, and the centre-backs to split.

And as this image shows, Nolito received most passes from Kolarov and Clichy during the game (except for David Silva), such was the positioning of the team and the space for the Spanish winger to move back into…

Finally, the map of chances created show the value of width to Guardiola's side, and like at Bayern, there will be great creativity and threat provided from the flanks -- just substitute Robben and Ribery (or Costa and Coman) for Sterling and Nolito (or Sane and Navas). Premier League full-backs are going to have a tough year ahead.