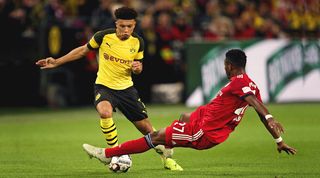 Wondering how to watch the Bundesliga? We've got you covered.

Action is more or less guaranteed in Germany's top division, famous for its raucous atmospheres, cheap beer and glorious sausages. There's even some football too – though Bayern Munich have surprised absolutely nobody by winning an eighth straight title. Borussia Dortmund once again fell short this year, but will be giving their best to finish second.

Borussia Monchengladbach and RB Leipzig and Bayer Leverkusen will now be scrapping it out for the remaining two Champions League spots. The Bundesliga is Europe's most entertaining top flight; the only one of this continent's Big Five leagues to average more than three (3.18) goals per game last season. Just another reason to keep watching!

You can only watch Bundesliga on BT Sport in the UK this season – which also has the rights to 20 Premier League games, the Champions League and Europa League, some FA Cup ties and, er, the Turkish Super Lig – so you'll want to sort yourself out with a BT Sport monthly pass.

DID YOU KNOW? You can now get BT Sport on Now TV – find out how here

If you're out of the country and need a VPN to get you sorted, here's our handy expert guide...

Which Bundesliga club should you support?

If you'd like to find a Bundesliga side based off the Premier League club that you support, you can check out this guide to the appropriate team for you to get behind.

Alternately, we've produced a flowchart below for you to find your perfect team based on your personality. Get in touch with us @FourFourTwo - we'd love to know which side you've chosen to follow.