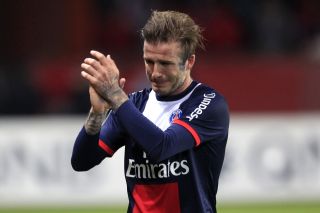 His contribution to that last success may have been minimal, having played just 232 minutes in the league since signing for PSG in January, but the fact the club offered him a one-year extension to his contract suggests they were entirely happy with the role he played.

Beckham's major job at PSG was as a substitute, introduced with around 20 minutes remaining in league matches. Carlo Ancelotti asked him to keep possession and help kill the game - and although his contributions in the final third were minimal, that's primarily because his passes were supposed to be simple and reliable, rather than ambitious. His display in the 1-0 win at Troyes was a good example.

Beckham started just one match in Ligue 1, a 2-2 draw at Saint Etienne. PSG were outplayed for long periods and struggled to create chances, but it was interesting to see Beckham used from the start, and given a little more freedom to be inventive with his distribution. He was much keener to attempt ambitious long passes and diagonals behind the defence, and came close to scoring a classic Beckham free-kick with a fine effort that whistled past the post.

The biggest match he was selected for, however, was the 2-2 home draw with Barcelona. Fielded deep in central midfield alongside Blaise Matuidi - an energetic shuttler, rather than the solid holding midfielder Beckham is accustomed to playing alongside - he acquitted himself well in a disciplined role. With Barcelona dominating possession and PSG sitting deep in two banks of four, Beckham's primary task was to break up Barcelona's passing moves, which he did with three clean tackles, and also three fouls.

Ancelotti indicated that he selected Beckham, rather than highly-rated Marco Verratti, because of his experience - but the young Italian showed that he wasn't overawed by the calibre of the opposition when replacing Beckham.

As PSG played higher up the pitch in the second half, trying to get back into the game, Verratti played a succession of pinpoint forward passes into the feet of attackers; his distribution was more positive and inventive than Beckham's, and Verratti also helped maintain energy levels as PSG closed down in midfield.

Perhaps that performance from Verratti essentially ended Beckham's career - he demonstrated he could offer everything Beckham does, and more. For Ancelotti, there was no need to pick an ageing veteran over a youngster that will play a significant part in PSG's future.

Beckham performed more than competently against Barca, but being outshone by a teammate 18 years younger must have made him consider his future. Ancelotti stuck to the same system for the away leg, but Verratti started ahead of Beckham, who played just seven minutes as a substitute. He didn't start another game for PSG, being used exclusively from the bench.

Indeed, Beckham's role in the title-clinching victory away at Lyon last week was an exaggerated example of his role at PSG - brought on in stoppage time, he simply took two time-wasting corners to run the clock down. PSG kept the ball in the corner, to confirm the 1-0 victory and seal the league title. He'll hope for a more spectacular farewell against Lorient this weekend.

Beckham's role at PSG wasn't about flashy, skilful performances, and instead about efficiently and effectively playing a functional role in the side, contributing his most notable moments from set-pieces. In a sense, that's a fitting way for him to bow out of football.