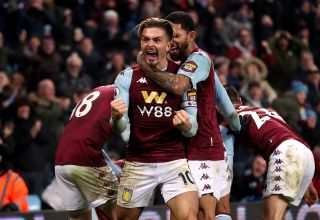 Excited for the Premier League return? English football is now just days away, and there's plenty still to settle in 2019/20.

Here's what we're most excited for...

The title race may be dead and buried but Liverpool’s pursuit of the record points tally remains alive.

The previous record, set by Manchester City only last season, stands at 100. The Reds are currently on 82 with nine games remaining, meaning they could potentially finish with a maximum of 109 – a frankly ludicrous prospect.

That means they could lose two matches and still set a new record.

Jurgen Klopp’s side still have to play the Merseyside derby, Man City and Arsenal all away from home, plus a home fixture against Chelsea, so it’s not a guarantee. Still, who would bet against them doing it?

Race for the Golden Boot

Leicester's Jamie Vardy started the season like a whippet, scoring 17 goals before Christmas - second only in Europe to Bayern goal-machine Robert Lewandowski - but has slowed quicker than the economy in 2020.

He’s scored just twice more since the turn of the year, and is at risk of being overtaken by the chasing pack, led by Arsenal’s Pierre-Emerick Aubameyang. The Gabonese forward has 17, followed by likely lads Mohamed Salah and Sergio Aguero on 16 apiece.

Big shout out to Danny Ings, though, who is the only member of the top five playing for a club in the bottom half. The Southampton marksman is on 15 for the campaign so far.

Who will get European qualification?

With Manchester City’s European ban for the next two season’s still in place, the team that finishes 5th have the rare luxury of qualifying for the Champions League. That eases a bit of pressure on Manchester United and Chelsea. But with Wolves and Sheffield United hot on their tails, there is little room for error.

The real question is whether Arsenal and Spurs can reverse their catastrophic starts to the season and sneak in the back door.

Arsenal have been rejuvenated under Mikel Arteta; if they can get something away at Man City in their first game back on June 17, they’ll have the wind in their sails with nine games to go.

Tottenham, meanwhile, have Harry Kane fit again; the England captain has now recovered from the thigh injury sustained back in January. If he can hit the ground running – though he often doesn’t – Spurs have the quality to overhaul those above them.

How will the relegation battle pan out?

Five teams appear at particular risk of joining Norwich in the Championship next season. The Canaries aren’t mathematically sunk yet but things look very bleak indeed, with Daniel Farke’s side four points adrift at the bottom.

Brighton have arguably the toughest run of games left. Graham Potter’s side face a member of the top six (Liverpool, Man City, Leicester, Chelsea, Manchester United and Wolves) on five occasions in their final nine matches. The Seagulls are at least two points ahead of those beneath them, however, which could just about see them to safety.

On paper, West Ham have the easiest remaining fixtures, with just three ties against top six clubs - the fact these are 4th, 5th and 6th placed Chelsea, Manchester United and Wolves is also worth noting. The Hammers face direct rivals on three occasions too, with a trip to Norwich and home clashes with Watford and Villa among their final four fixtures.

The smart money is on Bournemouth and Villa going down. Each face a top six team on four of their remaining gameweeks - the most of anyone after Brighton. Villa have a game in hand, but they also have the league’s leakiest defence, and lack a quality striker. Then again, they do have Jack Grealish...

New managers with a chance to experiment

There are three Premier League coaches for whom this season’s remaining fixtures provide an opportunity to experiment. Jose Mourinho, Mikel Arteta and Carlo Ancelotti all arrived at their respective clubs during the course of the season, and are yet to oversee a summer transfer window.

Mourinho, in particular, would have been expecting a huge transfer budget, with Spurs in need of rejuvenation after the Mauricio Pochettino era. It’s possible the financial impact of the pandemic will affect things but, even still, the Portuguese will have drawn up plans. He seems to have little faith in Tanguy Ndombele, while Danny Rose is entering the final year of his contract once he returns from his Newcastle loan. Both may be sold to raise funds.

Other players will need to impress if they want to remain at the club, with Ryan Sessegnon and Serge Aurier among those at risk.

Mikel Arteta’s calm authority and coaching ability have restored some hope to Arsenal fans ahead of the new season. The Spaniard will use the final ten matches to further instil his playing philosophy, while encouraging key players - including Pierre-Emerick Aubameyang, who will enter the final year of his contract this summer - to sign new deals. Mesut Özil’s future will also be in the manager’s mind. The German is  approaching his final twelve months of his lucrative contract too.

Carlo Ancelotti’s impact at Everton has also been impressive. The Italian has done well to find a formation that wings the best out of an imbalance squad - his decision to stick with interim boss Duncan Ferguson’s old-school 4-4-2 was a smart one - but will surely want to leave his own imprint on the side next season.

With relegation already avoided, the 60-year old may now want to experiment with formations before the season’s end. Might we see a midfield diamond emerge - a la his wonderful early-noughties Milan vintage – with Delph and Sigurdsson at the base and apex of midfield? Or perhaps the 4-2-3-1 Ancelotti employed at Bayern. His number 10 in that system was James Rodriguez, who is rumoured to be seeking new employment this summer. Make of that what you will.