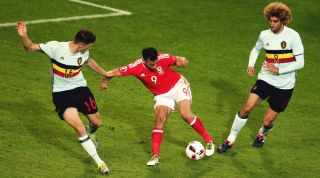 You have eight minutes to guess 32 players.

Hal is the scorer of one of the greatest goals in Welsh football history. It came at Euro 2016 against Belgium - you may remember it - as the no.9 who was without a club at the time, put his country in the lead against Belgium, in their first international tournament of the century.

It's truly a fantastic goal: Robson-Kanu was facing in the opposite direction, only to take two Belgian players out of the game with a simple Cruyff turn, before burying it beyond Thibault Courtois.

The striker was one of 30 players to score in the Euro 2016 knockout rounds - how many of the other 29 can you recall?