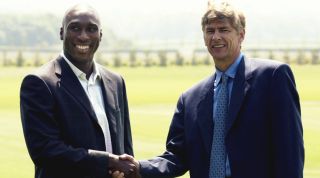 There is nothing unanimous in football. Arguments blossom in the Premier League far more readily than the wonderkids we hype, and it's all amplified by the internet.

But if there’s one thing we should all be sure about, it’s that Sol Campbell’s move to Arsenal was the single greatest transfer in the history of the Premier League. There is little competition that can compete with it.

Picture, for a second, a modern-day equivalent. Think of Aaron Ramsey and how closely woven he became into the fabric of Arsene Wenger’s late Arsenal career. He wore the captain’s armband for the Gunners, spoke openly of his love for the club and stated that he’d leave the Premier League, rather than face Arsenal in domestic competition - like an ex-girlfriend claiming that she’s emigrating, simply because she loves you so much that she couldn’t bear to run into you doing a big shop.

Now imagine him signing for Tottenham Hotspur. That's the shock that journalists were given when they turned up to cover the unveiling of Arsenal’s new back-up keeper Richard Wright, and were greeted with Spurs stalwart Sol Campbell.

GUNNERS Edmilson: "I had everything agreed to join Arsenal in 2000"

Arsene Wenger smiled and answered questions that day in July 2001, but the deal was orchestrated by David Dein, Arsenal’s then-vice chairman and unofficial Director of Football. Dein was quite the behind-the-scenes figure; one of the early voices proposing a Premier League to turn a waning sport into a multi-million-pound enterprise at the end of the 1980s, he was revered not just at Highbury, but respected throughout the football world.

Life for a manager was easy with him as your right-hand man: Arsene Wenger would simply write a shopping list, and Dein would go out and sign the players. He very rarely failed in acquiring them. He didn’t negotiate: he seduced.

And in the end, Tottenham never sold Campbell to Arsenal. It was David Dein who sold Arsenal to Campbell, as the pair would take walks around Dein’s garden in the football-less, summer evenings - remember those? - discussing the Gunners’ project, far away from the media’s watchful eyes. The idea was clear from Arsenal’s end: Campbell was experienced, athletic and a born leader. He was the perfect heir to Tony Adams’s throne, and he was the missing piece in a side that had finished as Sir Alex Ferguson’s bridesmaid for three years on the trot.

Campbell bought into the idea immediately. He’s since told of how on his return to White Hart Lane, he went to warm up in every corner of the cauldron to get a glimpse of what he’d be in for during that match. That he even considered putting himself through the burning, red-hot hate that Spurs fans launched at him, shows just the strength of his character. It's that mentality that Arsenal built on in the years that followed.

The defender won a double in his first season besides Adams. An FA Cup followed in his second, as Arsenal faltered at the final furlong of the campaign. And then came an unbeaten season as the rock of the Invincibles, before another FA Cup in 2005 and a Champions League final goal in 2006 - which ultimately proved pointless.

Who could argue that he’d made the wrong decision? Sol Campbell won a title at White Hart Lane - something he’d have dreamed of doing for years. Only he did it with Tottenham’s bitter rivals, before partying with Thierry Henry and co on the patch of grass he used to call his own.

OTD in 2001 - Sol Campbell signed for Arsenal on a free transfer from Spurs. Name a more heinous crime in football...😲 FourFourTwo

In the 19 years since Tottenham’s captain swapped sides in North London, we’ve seen all kinds of signings. Statements of intent, bargains, big investments and the odd swap deal, as agents tower like skyscrapers over what used to be a modest sport.

Sergio Aguero has become the silver-haired, enduring icon of a movement at Manchester City; the Philip Schofield to their ITV, only more intimidating. Likewise, Manchester United invested £12m in a toothy Portuguese show pony - who transformed into the artist now recognised as Cristiano Ronaldo - before they made a healthy £70m profit on his services. Virgil van Dijk healed 30 years of hurt at Liverpool - he could take the rest of the year off, should he wish.

But that doesn’t make them the greatest Premier League transfers ever. Any owner can exchange a briefcase of cash, Paypal details or a Comic Relief-style cheque. And sure, Frank Lampard, Jay-Jay Okocha, Petr Cech and Mohamed Salah can all claim to be solid pieces of business - but none quite match Sol Campell’s. Simply on an emotional level, it’s hard to see it ever beaten.

No one has ever signed their greatest rival’s best player for nothing, turned them into the fulcrum of their side, won their biggest trophy in said rivals’ back garden and written their name into the club’s most enduring period of football ever.

We will likely argue about football forever. Until the next pandemic, and beyond, until the European Super League washes us all away. But this debate is clear. There has never been a better Premier League signing than Sol Campbell at Arsenal. There just hasn’t.