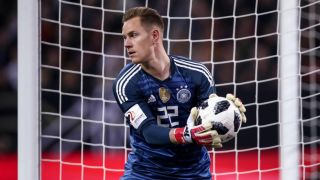 David de Gea and Marc-Andre ter Stegen have criticised the official World Cup matchball, while Pepe Reina has called for it to be changed ahead of the tournament.

Argentina star Lionel Messi previously gave his blessing to the Adidas¬ÝTelstar 18, which was inspired by the ball used at the 1970 tournament in Mexico.

But after Spain and Germany drew 1-1 in an international friendly in Dusseldorf on Friday, both goalkeepers who started the game were critical of the ball.

"It's really strange," said Manchester United goalkeeper De Gea, who was beaten by Thomas Muller's placed 25-yard drive.¬Ý"It could have been made a lot better."

Ter Stegen was even more critical of the ball, telling AS:¬Ý "The ball could be better; it moves a lot.

"But I think we're just going to have to get used to working with it ‚Äì and try to get to grips with it as quickly as possible before the World Cup starts. We've got no other option."

De Gea's international team-mate Reina, however, thinks the authorities have to consider switching the Telstar 18 for a different matchball.

"They should change it," Reina said.¬Ý"There's still time."