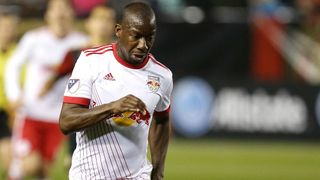 With the MLS clash petering out to a draw on Sunday, Red Bulls star Wright-Phillips broke the deadlock in the 87th minute before sealing the points in the second minute of stoppage time.

After Derrick Jones was sent off eight minutes into the second half, Wright-Phillips opened the scoring with a trademark close-range finish at Talen Energy Stadium.

Kemar Lawrence whipped in a low delivery across the six-yard box and Wright-Phillips pounced to poke home the opener.

The English forward completed his double in the 92nd minute when Wright-Phillips – in almost identical fashion – met Salvatore Zizzo's low cross inside the area.

The win helped the Red Bulls up to fifth in the Eastern Conference, seven points clear of 10th-placed Philadelphia.