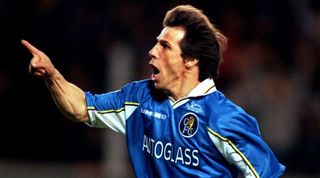 The 1990s was a special time for the Premier League.

Though the arrival of Sky Sports saw additional cashflow and a continental vigour injected into the English game, it still retained some of the old alongside the new.

For the best part of a decade, fans watched as the dying embers of the old Division One rough-and-tumble made way for something worldlier and more watchable.

The result was a series of teams that offered up heady mixes of the two. Teams that were loved by neutrals and live long in the memory despite, by and large, failing to lift much silverware.

Prior to Paolo Di Canio’s arrival the eclectic and highly combustible pairing of Eyal Berkovic and John Hartson brought the good times to Upton Park.

Under Harry Redknapp, an attack-minded side containing a young Rio Ferdinand and Frank Lampard finished a credible eighth and reached the FA Cup sixth round as well as the League Cup quarter-final.

They might have gone further too, had they not come up against Arsene Wenger’s double-winning Arsenal side in both.

Hartson was in his element, scoring a career-best 24 goals to spark rumoured interest from Manchester United.

But it all ended in tears the following season when the Welshman was filmed booting Berkovic in the face after a training ground bust-up.

Hartson left a few months later, with Berkovic reflecting: "If my head had been a ball, it would have been in the top corner of the net".

The greatest team to ever be relegated, Bryan Robson brought Champions League winner Fabrizio Ravanelli to the Riverside in the summer of 1996, along with the gloriously permed Brazilian midfielder Emerson, where they soon linked up with the likes of Juninho, Gianluca Festa and, er, Phil Stamp.

The ‘Silver Fox’ made a sensational start, scoring an opening day hat-trick in a 3-3 draw with Liverpool. By September, Boro had reached the dizzying heights of fourth. It wouldn’t last.

Though prolific in front of goal, Robson’s team simply couldn’t defend and soon found themselves bogged down in a relegation dogfight that could have been avoided had the club not postponed a fixture citing illness. The resulting three-point deduction saw them relegated.

Even so, Middlesbrough, led brilliantly by Juninho, went down in a blaze of glory, losing both the League Cup and FA Cup Finals to Leicester and Chelsea respectively.

Spurs were a force of nature under Ossie Ardiles, ditching any attempt at defending in favour of an all-out attack led by the ‘famous five’ of Darren Anderton, Ilie Dumitrescu, Nicky Barmby, Teddy Sheringham and Jurgen Klinsmann.

Klinsmann was the standout, linking up brilliantly with Sheringham to score 30 goals in all competitions. His goal celebrations proved just as memorable too. The German ended the season with the Football Writers’ Association Footballer of the Year award, but Spurs ended up empty handed.

By then, Tottenham’s disregard for defending had seen Ardiles sacked and replaced by Gerry Francis.

Spurs finished seventh, albeit with a frankly ridiculous goal difference of just +8, while their penchant for lurching from the sublime to the ridiculous continued in the FA Cup, where they followed a famous quarter-final win over Liverpool up with a 4-1 at the hands of Everton in the semis.

Football fans everywhere owed a debt of gratitude to Aston Villa in 1994, after Ron Atkinson’s team defeated Manchester United 3-1 in the League Cup final to end the Red Devils’ hopes of an historic domestic treble.

It was a fitting reward for a side that contributed much to the early part of the Premier League, having led the way for much of the 1992/93 season.

It was also sweet revenge for Atkinson, who Ferguson had replaced as United boss. The front pairing of Dean Saunders and Dalian Atkinson may not have been as prolific as previous, but they had a knack for scoring crucial goals.

Allied to that was Villa’s strong Irish contingent, including Steve Staunton, Andy Townsend and Paul McGrath, who gave the team a solid, likeable spine that helped blood in youngsters like Ugo Ehiogu.

Forest came out of nowhere to defy their status as newly-promoted also-rans and finish third, ensuring European football for the first time in decades.

Much of that was down to the goals of Stan Collymore, who scored 22 times as part of an effective partnership with Dutchman Bryan Roy in attack.

Collymore wasn’t the only reason for Forest’s success, of course. Colin Cooper and Stuart Pearce helped provide a solid defensive base while there were moments of magic in midfield from the likes of Ian Woan and Lars Bohinen, who both had a habit of scoring spectacular goals.

But Collymore was the undeniable driving force, as demonstrated in the season following his £8.5 million move to Liverpool, when manager Frank Clark attempted to fill the void with Jason Lee.

Wimbledon regularly punched above their weight under Joe Kinnear, but the 1996/97 campaign represented the pinnacle of his time at the club. It was the year the Dons not only finished a commendable eighth in the Premier League, but also reached the semi-finals of both the FA Cup and League Cup.

All of which was done on a shoestring budget, with Kinnear earning acclaim for his ability to unearth signings like midfielder Oyvind Leonardsen, while getting the best out of club stalwarts like captain Robbie Earle and Marcus Gayle. Yes, that Joe Kinnear.

There were plenty of highlights, but the standout moment was undoubtedly the sight of Vinnie Jones scoring what would prove to be the winner in a 1-0 victory over Arsenal at Highbury. Football doesn’t get much better than that.

Long before the arrival of Roman Abramovich’s billions, Chelsea were a far more likeable presence in the Premier League. The 1997/98 squad, marshalled by Ruud Gullit and later Gianluca Vialli, was the best of the lot.

By then the Blues were already an increasingly global concern. Dutch international Ed De Goey arrived to shore things up between the sticks, while both Tore Andre Flo and Gustavo Poyet were signed for peanuts to join the ever-watchable Gianfranco Zola in attack.

It did the trick, with Chelsea scoring 71 times in the league – second only to Manchester United, who scored 73.

Though there was something a bit soap opera about Gullit’s departure, after a falling out with chairman Ken Bates, and the fact Vialli – a player he had a frosty relationship with – took over, the Italian was a likeable replacement and ended up guiding Chelsea to fourth as well the League Cup and European Cup Winners’ Cup, with the second trophy secured via a memorable strike from a half-fit Zola.

Otherwise known as the Tony Yeboah season, this was the campaign that saw the Ghanaian write his name into football folklore with not one, but two of the greatest Premier League goals of all time.

To this day, debates rage as to whether his goal against Liverpool or his strike against Wimbledon represents his finest work. Whatever the case, this was the season when Yeboah peaked at Leeds, scoring 19 goals in all competitions, including a memorable hat-trick against Monaco in the UEFA Cup.

He was the standout star of an eclectic squad. Players like Gary McAllister, Tomas Brolin and Carlton Palmer represented the good, the bad and the ugly of Howard Wilkinson’s occasionally brilliant but often frustrating Leeds side.

A team that romped to the League Cup final, only to go down 3-0 to Aston Villa at Wembley. One that defeated Liverpool via that Yeboah goal, only to lose 5-0 to the Reds later that season. At times it was as maddening as it was magnificent.

Like many of the teams on this list, Norwich became favourites among neutrals by going hell-for-leather whatever the occasion. There were simply no half measures with Mike Walker’s team, who demonstrated a complete disregard for the natural order of things from the off with a stunning 4-2 opening day away win over Arsenal.

That set the tone for a series of high scoring affairs, with the Canaries keeping just two clean sheets over the first four months of the season.

Yet somehow, they kept racking up wins and points to stay in the title picture, with players like Mark Robins, Jeremy Goss, Ruel Fox and, of course, Chris Sutton making the kinds of contributions still fondly remembered by the Carrow Road faithful to this day.

Eight points clear of the chasing pack in early December, Norwich’s form ultimately collapsed in April, but they rallied to finish third and qualify for the UEFA Cup courtesy of a thrilling 3-3 draw with Middlesbrough on the final day. They wouldn’t have had it any other way.

Kevin Keegan’s Entertainers could and probably should have been one of the greatest Premier League-winning sides of all time. A team built in King Kev’s image, when Keegan sold star strike Andy Cole to Manchester United halfway through the season prior, fans couldn’t have known it would be the catalyst for a full tilt at the title.

Taking Keith Gillespie from United as part of the deal, Keegan used the Cole money to buy Les Ferdinand from QPR in an inspired bit of business for the Magpies. David Ginola also joined the midfield ranks from PSG while Warren Barton linked up with Philippe Albert as part of a back line that was arguably better at scoring goals than it was defending them.

For a while, the plan to “attack, attack, attack” worked to perfection, with Newcastle opening up a 12-point lead by late January. But it couldn’t and didn’t last. Five defeats in eight saw them reeled in by a Manchester United side boosted by the return of Eric Cantona from long-term suspension. You know the rest.

ANALYSIS How powerful is the fear of losing? What Everton's weekend comeback tells us about Watford