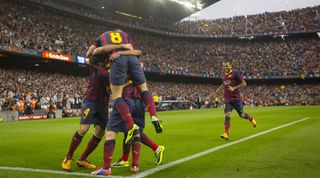 Even Messi can put his feet up

Everyone deserves the odd afternoon idling about in the office, getting only the bare minimum done. That was Leo Messi’s Clásico on Saturday, as the Argentine largely failed to get into the match aside from the odd run. Normally that would be very bad news indeed for Barça, a side somewhat dependent on the player in recent seasons.

But that was not so at the weekend, with Neymar picking up the slack and a remarkably improved Alexis Sánchez sealing victory against the visitors with the most beautiful of dinks over Diego López. Messi is now allowed that Friday feeling, the footballing equivalent of a bored office worker refreshing Facebook every five seconds.

Real Madrid haven't learned when to Bale out

The more Gareth Bale is being forced into action before he is ready for full-on action, the harder he's going to find it. Being unfit, without confidence and still learning the ways of La Liga is no way to face El Clásico.

A morale-sucking hour in the Camp Nou where the Welshman’s impact was limited to a couple of wayward long shots really isn’t going to help matters. The need to jam Bale into the starting line-up, combined with the backwards decision not to play a striker, left Real Madrid in quite the unbalanced mess up front, until Carlo Ancelotti began correcting his mistakes once the second half was underway. The lesson LLL can impart from personal experience is this: if you're going to buy a €100 million sports car, don’t take it for a spin across a ploughed field with the knackered gear box and crocked suspension.

This has been the attitude of Atlético Madrid and Villarreal, who are keeping up with the traditional big boys in the top four by running all-comers into the ground. Atlético bounced back from their only league setback so far, a defeat to Espanyol, by pulverising Real Betis in the Vicente Calderón.

The Rojiblancos made sure there was no way the visitors from Seville were going to get a sniff of winning, knocking in the first strike after 13 seconds - the fastest goal in Atlético’s history - through 18-year-old Oliver Torres.

Villarreal were also knocked back last weekend with a flat defeat to Athletic Bilbao, but bounced back by crushing Valencia into tiny pieces with a 4-1 win. “We are a humble team but we had moments of great football,” beamed Marcelino, boss of one of two hardest-working sides in football today.

We're on for a classic top-four tussle

Athletic Bilbao’s 1-0 win at Getafe on Monday night makes the Basque club serious contenders for a Champions League place this season. And that is fine news indeed, not only because they are a brilliant club, but their form could lead to a classic battle for third and fourth between themselves, Villarreal and Atlético Madrid. The fight could be even better if Sevilla and Valencia can get their acts together - but that's probably getting a little bit greedy. Miracles don’t happen that often.

Joaquín Caparrós is a football genius

'Jokin' may have had a rough time at his last club - a testing spell at Mallorca that ended in the sack - but Caparrós is proving again that he is an inspirational coach by leading Levante into seventh, three points ahead of Valencia. Since the opening-day walloping by Barcelona which saw Levante thumped 7-0, the east coast club has only been defeated once, by Real Madrid. And only just. The side’s latest triumph was a comfy home win against Espanyol.

Valencia are the new Betis

Last season, the team LLL most enjoyed watching was Betis. It wasn’t just that the Andalusians played some mighty purty football, but that the outcome of each match they played in was madly unpredictable. Betis were as likely to concede five as score seven.

Valencia are going down a similar route, with Miroslav Djukic finding it quite the challenge at a team that swings from excellence to incompetence in a matter of days. Last week his side lost in Mestalla on Saturday, banged in five Europa League goals on Thursday and then collapsed in spectacular fashion at Villarreal on Sunday. “It is a hard blow and difficult to digest. We need to reflect on this,” admitted Valencia’s befuddled and bewildered boss.

Real Sociedad have had a reboot

Things might not have gone as well as planned in the Champions League for Real Sociedad, but they've improved considerably in La Liga. La Real have now climbed into a perkier ninth after a cushy 3-0 win over Almería. That follows last week's fine victory in Mestalla to leave manager Jagoba Arrasate chirpy. “Let us begin looking up the table,” he quipped.

Betis might be in a big piece of bother

Sunday’s 5-0 defeat at Atlético Madrid sent Betis down into the relegation zone and full crisis mode. The loss in the Vicente Calderón, a third straight defeat for Pepe Mel's people, is certainly not great news but the manager says that everyone needs to take a chill pill. “If we make a little drama for ourselves in round 13 then this is dangerous for a team that is still in administration.”

Malaga are a most confusing team

It's not at all easy trying to get a handle on what's going on with this new incarnation of Málaga. Bernd Schuster’s side have now lost three in a row without scoring a single goal, but looked more than decent in the four previous games, which included a tornado show against Rayo and a 5-0 win. “This is a bad day today, but we can’t lose our minds,” moaned Schuster, “we can’t say that the squad isn’t good enough.”

Although the vultures were a long way from circling around Celta boss Luis Enrique, the pressure was certainly building for a promising project to finally deliver. And deliver it did in some style, with a 5-0 home demolition of Málaga in perhaps the most surprising result of the weekend. “We never doubted ourselves in our worst times and we were faithful to our philosophies,” said relieved goalscorer Nolito on the pallet-cleansing tonking.