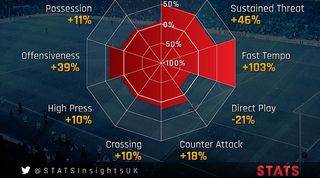 Everyone's a tactical expert these days – but the good folks at STATS can genuinely analyse players and teams unlike anybody else.

A lot of data tracking in football is static – that is, it doesn't necessarily evaluate movement, which is obviously quite important when it comes to making reasonable conclusions about tactics.

Fancy indeed – but more interestingly for you, here's how it actually applied to the Premier League big boys last season.

According to STATS data, Arsenal had the most Fast Tempo possessions in the Premier League last season (i.e. they played twice as quickly as the top-flight average). Unsurprisingly, they predominantly control possession in the opposition half with Build Up and a high level of Sustained Threat phases, while the Gunners are around the top-flight average for Maintenance – which implies they don’t look to control possession in the defensive half.

In a nutshell, here's the proof that it's all about control for Arsene Wenger, with little emphasis on a high press (unlike some of the clubs below).

No club in the Premier League achieves Sustained Threat like Chelsea do – the Blues were ranked No.1 for it last season, indicating their dominance in the final third. They were also top for Counter Attacking, which in turn means they're below the Premier League average for Direct Play (ranked 18th). Instead of attempting lots of long passes, they prefer to play up the pitch or on the break.

Everton are close to representing the Premier League average for possession-based styles, and are ranked No.9 for Maintenance, Build Up and Sustained Threat.

The Toffees' Offensiveness value is the lowest of the top seven, and it'll be interesting to see how these values change with the signings that Ronald Koeman has made this summer. In this respect, a lot rests on Davy Klaassen's shoulders.

You already knew that Jurgen Klopp likes his players to run a bit – but here's the stone cold evidence. Liverpool were ranked No.1 for the High Press last year, slightly ahead of Manchester City but a surprising 8% clear of Tottenham.

The Reds are 6% below the Premier League average for Counter Attacks, however, implying they like to transition upfield through Maintenance, Build Up and Sustained Threat areas. Translated: they get the ball in the build-up zone and move it quickly. In his second full season, Klopp will be be hoping his methods are rewarded by consistent results.

Pep Guardiola's aim is fairly clear: dominate play until opposition sides are squealing out safewords. Manchester City bragged the highest amounts of Maintenance and Build Up possessions in the Premier League last season, as they aimed to quickly move into the attacking half.

Guardiola's men were ranked No.2 for Counter Attacking too, helped by having arguably the Premier League's best player for that particular job in Kevin De Bruyne. With a fresh set of full-backs and Gabriel Jesus in for his first full campaign, what on earth might they be capable of in 2017/18?

Believe it or not, Manchester United were ranked second for Fast Tempo play last season (cover your eyes, Louis, you didn't work on all those dossiers for this). United were also the second-highest-ranked team in the top seven for Direct Play (behind Everton), but really we're just going to blame Marouane Fellaini cameos for that – their game is more about building play and keeping control.

Under Jose Mourinho's tenure the Reds were ranked in the league's top five for Maintenance, Build Up and Sustained Threat. It's all quite balanced for Jose's mob.

Let's just say Mauricio Pochettino isn't keen on kicking it long – only one team ranked below Spurs for Direct Play in the Premier League in 2016/17. The Argentine does like his High Press, mind. Spurs use it far more than the average Premier League side: the fourth-most of any team, in fact.

Tottenham are above the division average for Build Up and Sustained Threat, but they're ranked sixth out of the top seven (above Everton again; poor Everton) for these playing styles. Are they a little less attacking than everyone thinks?

Time for something lighter...