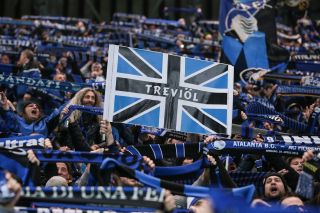 Champions League football returns to the San Siro this week. But neither Inter Milan nor AC Milan will play any part in it.

Instead, the iconic Milan stadium will play host to Atalanta’s last-16 tie against Valencia on Wednesday night - in the Bergamo club’s first Champions League campaign in their history.

Competing for a place in the Champions League quarter-finals is the latest chapter in a stark rise up Italian football for the club. Five years ago, Atalanta survived relegation from Serie A by the skin of their teeth after a 17th place finish in the Italian top-flight.

In recent years, they have been a regular member of Italy’s representatives on the European stage.

With their regular home ground - Stadio Atleti Azzurri d’Italia - not meeting UEFA’s stadium standards, the Atalanta fans need to travel over 40 miles to the San Siro for one of the biggest games in their club’s history.

This is not much of a problem for Atalanta fans, who travelled to the San Siro for their three group stage matches, as Milan is perceived as something of a second home for the club’s supporters.

In Italian culture, the people of Bergamo, the area where the club is situated in the province of Lombardy, are known as ‘i muratori’ (the Italian word for bricklayers), due to the role the Bergamo people played in the construction of the many stunning buildings in the city of Milan.

It is this same pride that the Bergamo people aim towards their football team - Atalanta plays such a pivotal role in the everyday life of the ‘Bergamaschi'.

Such is the importance of football club to the Bergamo area, that every newborn child born in the region is presented with the club’s jersey at the hospital they are born in, which ensures the local team has the universal support from everyone in the nearby area.

This, in turn, has created a deeply passionate fanbase. The club’s ultras, known as Curva Nord 1907 and regularly located in the (you guessed it) north end of their normal home ground, are perceived as the trendsetters when it comes to choreographing displays of support in Italian football.

Consistent singing and chanting throughout matches, weekly pyrotechnic displays and parading new signings through the streets of the city, Atalanta are just as much known for their fans’ diverse methods of supporting the club as they are for their efforts on the pitch.

The club also possess arguably the most famous ultra in Italy, a country which is universally known for its overwhelming fan support across the leagues.

Claudio ‘Il Bocia’ Galimberti is as famous to the club’s supporters as any player in Atalanta’s long history. Supporters come to Atalanta’s home ground to meet and join in with ‘Il Bocia’s’ support of the club, and while his, er, passionate actions have resulted in him receiving a ban from all Italian sporting events until 2022, his legacy lives on in the vocal support of the Atalanta fans.

Speaking to the Guardian in 2014, Il Bocia explained: "What Ultras do is bring the city together. It is our duty to preserve the real values of this sport and while we are around, we will carry that passion forward till the bitter end."

Such a passionate fan base needs an appropriate figure at the top end of the club. That comes in the form of Atalanta’s technical director Giovani Sartori. A former professional player for the likes of AC Milan, Sampdoria and Chievo, he joined the Nerazzurri boardroom in 2014 and is partly responsible for their rise in form.

Sartori made the brave decision in 2016 to replace former boss Eduardo Reja with current manager Gian Pero Gasperini, despite the club finishing the 2015/16 season in a comfortable 13th place in Serie A.

The appointment of Gasperini, however, looked like a masterstroke as the Italian led the club to 4th place in Serie A and a spot in the Europa League during his first season in charge.

A 7th placed finish followed in 2017/18, before being Serie A’s surprise packaged last season by finishing third and qualifying for the Champions League for the first time ever. Now the club stand on the brink of a fairytale run in Europe’s top competition starting with Wednesday’s clash with Valencia.

Sartori’s role in this success goes far beyond the appointment of Gasperini. The technical director helped the club make clever attacking acquisitions to boost the Atalanta squad since 2017, including free-scoring attackers Josip Ilicic, Duvan Zapata and Luis Muriel.

Together with club captain Pau Gomez, all three are part of one of the best attacking line-ups in the continent, with Gasperini rotating between the trio for the two striking positions in a 3-4-1-2 formation.

While Zapata has struggled with a knee injury this season, the Colombian showed his goal-scoring prowess by netting 23 goals in 37 Serie A appearances for Atalanta last season. Meanwhile, Ilicic and Muriel possess two of the best minutes per goal ratio in Europe this season, with the pair averaging a goal every 89 and 74 minutes respectively.

On-loan Chelsea man Mario Pasalic is also contributing for Atalanta in the final third, with the latest of his seven goals in all competitions this term coming against Roma on the weekend - a sensational curling effort in the second-half which decided the game.

These attacking acquisitions have paid off for the Nerazzurri, especially this season. Atalanta are Serie A's highest scorers this season with 63 goals so far this term, 17 more than reigning Scudetto champions Juventus and eight more than Lazio, the second-highest scoring run.

Furthermore, free-scoring Atalanta have twice netted seven goals in an Italian top-flight match this season - a 7-1 home win over Udinese and a 7-0 gazumping away at Torino. They also achieved back to back 5-0 wins against AC Milan and Udinese this winter.

There’s plenty to cheer for for the passionate and fervent Atalanta supporters this season, whose team are not here to make up the numbers in this season’s Champions League.

While you’re here, why not take advantage of our brilliant subscribers’ offer? Get the game’s greatest stories and best journalism direct to your door for only £12.25 every three months – less than £3.80 per issue! Save money with a Direct Debit today.

SPURS No Son, no problem: 5 options for how Tottenham Hotspur will cope with no striker

QUIZ Can you name every Champions League and European Cup-winning manager?

GUIDE Champions League live stream best VPN: how to watch tonight from anywhere in the world