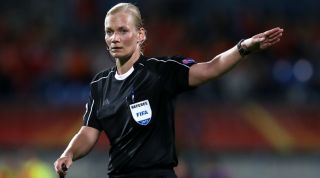 The 38-year-old police officer – reportedly the partner of former ref Howard Webb – has been officiating in the German second tier since the 2007/08 season, and was recently handed the big promotion to the nation's top tier.

Non-league side Chester advertise for new manager on their website

Both the Hertha Berlin and Werder Bremen coaches wished Steinhaus well ahead of her Bundesliga debut.

"I wish her a good match," Hertha coach Pal Dardai was quoted as saying by Bild. "She does a really good job."

After finding out she would be receiving the call-up, the German referee spoke of the emotions she was feeling. Steinhaus told reporters in May: "Disbelief, joy, happiness, relief, curiosity, I do not know. It was simply a turbulent rollercoaster ride of emotions.

"It has always been my dream to referee in the Bundesliga. That this dream is to become true, now naturally fills me with great joy."