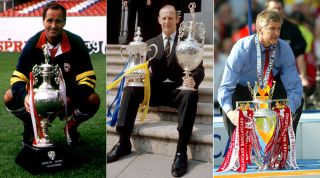 Those Arsenal fans who voiced their displeasure at proceedings throughout the second half of the game against Chelsea made themselves look foolish. Not so much the pockets of supporters who booed the returning Cesc Fabregas, rather those who sang "Boring, Boring Chelsea" as Jose Mourinho's Blues repelled the home team's attacks as the second half wore on.

It simply demonstrated that Chelsea’s tactics in the goalless draw were irritatingly spot on, and it handed the psychological initiative to the visitors. That’s what happens to supporters of big clubs like Arsenal who haven’t seen their team win the title for over a decade. They channel their pent-up rage and sense of frustration at their own team's weaknesses and take it out on others.

Admittedly, the second half was a largely dire spectacle, with the home team’s fans increasingly frustrated by their team’s inability to break down the most resolute of defences. Fans may also have been looking to get a reaction from Mourinho, known for cupping his hand to his ear and waving a finger admonishingly at Gunners fans down the years when subjected to a barrage of abuse.

Instead, he spent much of the second half prowling around his technical area, instructing his team ​to stay resolute and not lose the ball when under pressure. Not that Chelsea players need too much persuasion to do that. It's probably why they are currently 13 points ahead of the Gunners, with at least one hand firmly on the Premier League trophy.

The “Boring” chants did get to Mourinho, otherwise he wouldn’t have launched his robust defence of Chelsea’s approach in those post-match press conferences. But Jose delivered a stinging rebuke to Arsenal fans, the equivalent of a barbed arrow striking its target with deadly accuracy: “You know, boring I think is 10 years without a title. That’s very boring,” he claimed. Leaving aside the argument that Chelsea spent years before Financial Fair Play taking full advantage of Roman Abramovich’s petrodollars while the Gunners were spending on the Emirates, Mourinho was spot on.

So was Chelsea skipper John Terry’s comment: “Possession and tippy-tappy football’s great, but if you’re not winning games, you’re not going to win the league.” Despite the fact that Arsenal may retain the FA Cup and finish runners-up in the Premier League, they simply cannot manoeuvre their way past Chelsea’s parked bus. And Arsene Wenger cannot go toe-to-toe with Mourinho and get the better of him. And the fans know it.

One-nil to the Arsenal

The second-half chanting confirmed the Arsenal supporters’ sense of frustration and powerlessness when it comes to dealing with their west London rivals. Over the last 12 years, Chelsea have flexed their financial muscles, signed Gunners’ left-back Ashley Cole in 2006 (the first signal that Arsenal were becoming a feeder club for wealthier rivals) and won the Champions League, something which London’s historically most successful club are yet to achieve. But just as importantly, Chelsea have adopted many of the principles which were once the hallmark of all successful Gunners sides.

Bertie Mee’s Double-winning side of 1971 and George Graham’s teams in the late 1980s and early 1990s were built around resolute defences, a never-say-die team spirit and an unerring ability to grind out results. “The bottom line is that the team wins. I’ll leave others to worry about the style,” said Mee, whose team won 1-0 on no fewer than 11 occasions in 1970/71, including eight from February onwards as they inched towards their first domestic silverware in 18 years.

"Every team needs to be built from the back,” insisted Graham, “otherwise you’re constructing your team on shifting sands, and it won’t work.” Mee’s and Graham’s sides were the ultimate flat-track bullies, and the fans seemed content enough.

A good number of Arsenal’s grumblers would have lustily sung “One-nil to the Arsenal” 20-odd years ago, as Graham’s side kept a supremely talented Parma at bay in the 1994 Cup Winners' Cup Final, winning through Alan Smith’s goal. 1-0, of course.

Things might seem very different under Wenger, but the Frenchman has also appreciated the value of a narrow victory. Perhaps the complaining Gooners have forgotten that Wenger’s 1997/98 Double-winners won seven league games 1-0, six of them from February onwards, including the crucial March victory at Old Trafford.

SEE ALSO What did George Graham ever do for Arsene Wenger? Here's what...

By the 2003/04 season all bar Keown had gone, but Wenger still admitted that the pivotal game of the Invincibles campaign had been the infamous goalless draw at United in September, “which invoked the true spirit of the team, and showed our fighting qualities”.

As Wenger explained: “All successful Arsenal teams have had great leaders on the pitch, and a midfield which can screen the back four.” Presumably, the leaders he was referring to included Adams and Frank McLintock, who insisted that the first rule in matches was not to concede a goal.

John Terry, displaying a similar attitude to those Arsenal skippers of yore, does the same job as Adams and McLintock in Chelsea’s defence. The defensive midfielders Wenger alluded to included Emmanuel Petit and Patrick Vieira who, when necessary, dropped back to act as makeshift defenders. It’s something which Chelsea midfielders now do with aplomb, as Arsenal discovered on Sunday. Since 2004, Arsenal have sacrificed power for pace, battle-hardened soldiers for pint-sized playmakers. They may have won praise, but they haven’t won many trophies.

Earlier this week, Graham himself admitted that Mourinho’s Chelsea remind him a lot of his Arsenal sides. Gunners fans wouldn’t necessarily choose to revert to that blue-collar, often rudimentary style: they’ve enjoyed a more enlightened brand of football for too long. But watching Chelsea at the Emirates Stadium must remind them that in order to win the league, teams need a potent cocktail of pace, power, resoluteness and meanness.

The Gunners have shown increasing mettle this season by winning at Old Trafford and the Etihad, but despite the emergence of Francis Coquelin, and a tightening-up at the back in recent weeks, the power and resoluteness is some way off that of Chelsea’s.

There’s more than one way to win the championship and, as any Arsenal fan who knows their club history realises, there’s absolutely nothing wrong with parking the bus when the occasion calls for it. “Some games are football matches; some are just battles which you have to win, come what may. It doesn’t matter how you achieve it,” claimed Vieira in 2004.

To think otherwise is utterly naïve, and if the Gunners are to launch a realistic assault on the title next season, they need to watch and learn from Mourinho’s Chelsea. The “Boring Arsenal” approach needs to come back into vogue when required. Otherwise, Arsenal fans will be bleating with frustration once more as their team and manager get out-thought, out-manoeuvred and outmuscled by Chelsea once more.

Now that would be boring.