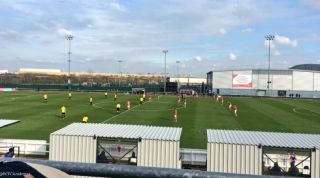 Perhaps Watford's U23s were revelling a little too hard in the success of the senior team on Monday night – the following day they were 4-0 down inside 23 minutes of their clash against Bristol City at the Stoke Gifford Stadium.

Rory Holden scored twice, while Antoine Semenyo and Kel Akpobire added a goal each to ensure a rapid start for the hosts. That should have been enough for Bristol City to cruise towards a comfortable victory in this bottom-of-the-table battle.

But the Robins also showed why they're cut adrift at the bottom by somehow allowing Watford to draw level right on the stroke of half-time, including two-goals for 16-year-old debutant Ryan Cassidy.

Then it got worse.

Two minutes after the restart, Watford whippersnapper Cassidy completed a hat-trick to put the Hornets 5-4 up – only for the remarkable comeback to be spoilt when Bristol City levelled through Tyreek Bakinson in the 58th minute.

No goals in the final half an hour? Rubbish.