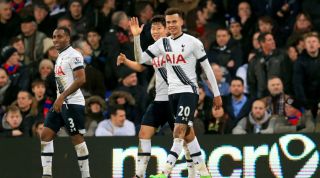 As per Tottenham’s previous league game, a 4-1 victory at home to Sunderland, Dele Alli began in a more attacking role – in line with Christian Eriksen and Son Hueng-Min, just behind Harry Kane. Again, as per Sunderland, his impact from this position was muted.

The intricate passing game of Kane, Son and Eriksen just doesn’t fit with Alli’s comparatively all-action approach. Frequently, the young Englishman found his presence ignored as his fellow attackers worked triangles between themselves. Alli’s positioning, more centred on bursting forward (with ball or without) just doesn’t fit comfortably with this level of intricacy.

Everything changed in the 56th minute, however. At 1-0 down, Mauricio Pochettino replaced Eric Dier with Nacer Chadli; the incoming Belgian adopted an advanced position alongside Son and Eriksen, Alli dropping back to partner Mousa Dembele in the middle of the field.

With plenty of space now in front of him, Alli could play his natural game of arriving late in and around the box, catching defenders off-guard and working his way into the space created by those intricate runs and passes of his teammates ahead of him.

The highlight of his work came after 84 minutes, a contender for goal of the season in which he juggled the ball before volleying home from outside the box. He also hit the bar before the final whistle.

All three of Spurs’ goals came after Alli was moved into a central midfield role. That’s not a coincidence.

Is left-back a problem area for Spurs?

Wilfried Zaha was Palace’s top performer today, his impact helped enormously by a performance that Danny Rose will want to forget in a hurry. Time and time again Zaha was able to put Rose under incredible pressure, and so frequently it was the attacking party that came out on top.

Rose found himself unable to deal with Zaha’s movement and passing, the latter skill causing all kinds of difficulties for the rest of Tottenham’s defence.

Given Spurs’ inability to stop Palace’s progress along the right flank, it seemed inevitable that the home side would score from such a position. They duly did so, although own-goalscorer Jan Vertonghen will feel hard done by at the nature of his deflection off a Zaha cross.

While Palace proved themselves able to counter-attack regularly – particularly in the latter periods of the first-half – it was only down the right hand side that they saw any genuinely joy. Resultantly, Zaha began to see more and more attention in the form of fouls and physical action against him.

The rough tactics just about got Rose through proceedings today, but it’s not an approach Spurs will enjoy requiring if they’re going to challenge for the title.

Today’s Vertonghen own goal was the first time this year Palace this year have bothered a Premier League scoresheet. Over the same period, they’ve now shipped 11 goals. Unsurprisingly, then, they’ve yet to win in the Premier League in 2016.

Perhaps even more damning is the fact that Palace’s opponents have now scored as many goals for them as all their own strikers (stand up Connor Wickham, on one goal). At this stage, it’s phenomenally difficult to see where goals are going to consistently come from.

Part of Palace’s problem is a lack of creativity, particularly in the absence of Yannick Bolasie. Indeed, Bolasie’s spell on the sidelines through injury has coincided precisely with Palace’s embarrassingly poor goalscoring record.

This, certainly against Spurs this afternoon, has seen the South London side rely more heavily on long balls. Wickham demonstrated that he is more than able to get on the end of these passes from deep positions, but his subsequent link-up play is, to put it lightly, dreadful. Against Spurs, less than a third of his passes in the attacking third reached their target.

Without the distraction of Bolasie to worry about, it’s too easy for opposition defensive lines to see what’s coming and predict what they need to worry about. Zaha might have found success against Rose today, but a quality attack is built on more than one player winning an individual battle.

Spurs must improve off the ball

Pochettino’s team would be less vulnerable to players like Zaha if they improved their performance without the ball. All too often Spurs rely on their central defenders to prevent goals, when they would be better served if they closed down attacks before they started.

One of the pillars of Pochettino’s approach to the game is a high press which sees his front players look to win the ball from opponents deep in their own half; however, this seems to have fallen by the wayside in recent weeks.

Eight tackles were made in Palace’s half, but too few of the all-important interceptions were recorded in attacking areas. Interceptions are where a team like Spurs can cause huge damage, the space awarded to the ‘interceptor’ suiting brilliantly the elite passing ability of their attacking trident.

Of course, this could all be part of Pochettino’s master-plan. Certainly, a footballing language that relies on constant pressing is tiring… and a season is long. Employing a standoffish approach to certain games might well be a sensible option with a view to keeping legs fresh over the many fronts the Lilywhites are competing across this season.

Harry Kane’s recent goal record is beyond reproach: 12 in his last 14 Premier League games. However, for long periods throughout games it is difficult to see what value he is adding to his team.

If you’d never watched Spurs before, you certainly wouldn’t consider Kane to be a valuable asset to the club off the back of his first-half display. Not only was he struggling to find positions that would allow his teammates to feed him with worthwhile passes, but what he did when he got the ball was distinctly underwhelming.

That all changed in the second half, helped no end by the energy provided by Alli when the midfielder was moved deeper into midfield. Suddenly, now a goal down with backs against the wall, Kane came to life. His positioning improved, as did his passes.

For sure, the added problem of Alli driving forward from deep threw Palace’s defence into a panic. That helped create space within which Kane could operate.

In fact, Kane’s performances represent an apt microcosm of Spurs in general. Pochettino’s side have gained 14 points after going behind in games this season, more than any other team in the league. This never-say-die attitude has resulted in an unbeaten run of 10 Premier League away games, something that hasn’t happened for Spurs since 1995.

Analyse Crystal Palace vs Tottenham yourself with Stats Zone