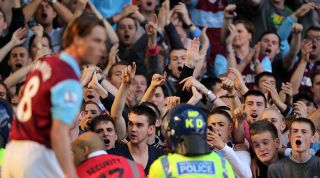 The current England manager's playing days are - unfairly - largely remembered for a certain penalty shoot-out in 1996. He was in fact a dependable centre-back who rarely put a foot wrong, and the young captain of a good Palace side that would have survived were it not for the fact that four teams were required to be relegated that year in order to reduce the Premier League from 22 clubs to 20.

There can't be many happy memories for Southgate from this period, as this was also the season when Roy Keane attempted a stamp a hole in his chest. Ouch.

The cult hero Norwegian striker was a skilful and dynamic player who bagged 13 goals for the Robins in his first season in England – although didn't get his first until January 22. Fjortoft's iconic aeroplane celebration was soon replicated in school playgrounds across the country, but he couldn't quite keep Swindon up.

He suffered the same fate four years later, this time with Barnsley.

1993/94 wasn't a good season for Norwegian strikers: joining Fjortoft in suffering relegation to the second tier was Flo, whose 10 goals weren’t enough to save the Blades.

Brighter days were thankfully ahead, though, as the 6ft 4in frontman went on to score 110 goals in 161 league games for Strømsgodset, as well as being a thorn in the side of Brazil when Norway ran out 2-1 winners against the Seleção at France 98.

Given their current standing in League One, it's easy to forget that Blackpool were an entertaining Premier League side of the current decade. Adam was their talisman, with the Scot having spearheaded the Tangerines' rise to the top flight with a magnificent array of long-range strikes.

Adam took his game to another level in the Premier League and was even mentioned as a possible contender for the PFA Player of the Year award after being directly involved in 22 goals across all competitions. Sadly, Blackpool went down on the final day – but he got his big move to Liverpool.

Acquiring De Bilde from PSV was seen as a major coup for Wednesday in 1999, but the Belgium international was unfortunately one of few positives at Hillsborough that season. The Owls looked doomed as early as September, when they were thrashed 8-0 by Newcastle, although 10-goal De Bilde did his best to try to keep their heads above water.

After 34 years in the top flight, Coventry's luck finally ran out in 2001. The only solace they could take from their final season at the top table were the performances of Bellamy, who tried his best to keep the Midlanders in the Premier League.

The Welshman later admitted that he didn't enjoy his time at the club, however, which was hardly surprising after a six-goal campaign. Then again, Bellamy was never prolific: after joining Coventry for this season, he only ever got to double figures in a league season three times (one of those in the second tier) – and never scored more than 13 (at Blackburn in 2005/06).

Before David Silva and Sergio Aguero pitched up in the north-west, Kinkladze was one of the most exciting players that Manchester City fans had ever witnessed. The wiggle-hipped Georgian wizard, who was capable of dribbling past virtually any opponent, scored some tremendous goals for the Citizens, although homesickness prevented him from realising his full potential at Maine Road.

If every retired Leicester legend made a claim to get in the Foxes' current side, Izzet would have one of the best chances. In 2003/04, the Turkey international got a Premier League-high 14 assists ahead of Ryan Giggs, despite the Foxes' miserable relegation to the second tier. Having stayed put upon their first relegation in 2002, Izzet finally left for Birmingham on a free transfer after eight successful years in the East Midlands.

Much like West Ham the year before, Leeds suffered relegation despite possessing a squad brimming with talent. Future stars like James Milner and Aaron Lennon were still cutting their teeth at that stage, while club stalwarts Alan Smith, Ian Harte, Lee Bowyer and Lucas Radebe should really have been good enough to keep the Yorkshiremen up.

Of them all, though, Viduka was least deserving of the humiliation: the Australian brought his otherwise-impeccable Leeds career to an end with a respectable 11 league goals.

Scoring 21 Premier League goals would be enough for the Golden Boot in some seasons, but Johnson was pipped to the award by Thierry Henry in 2004/05. The speedy striker was on fire for the Eagles upon their return to the top tier, scoring more than half of Iain Dowie's men's overall tally - even if 11 were penalties.

His exploits in front of goal earned him an England call-up, but Palace were victims of West Brom's great escape on the final day.

NEXT PAGE: Finish bottom, boast FWA Player of the Year...

QPR were a shambles in 2014/15, winning just eight matches and conceding 73 goals. They did find the net 42 times, though, with Austin reponsible for 18 of them.

The former Swindon striker was a rare bright spot in a dismal year for the west Londoners, finishing the season as the division's fourth-highest goalscorer - one place above a certain Alexis Sanchez.

England midfielder Parker was a man possessed for the Hammers, scoring seven goals and delivering many more inspiring team talks in a year where he rarely put a foot wrong.

Despite his team finishing 20th, Parker's lung-busting displays earned him the FWA Footballer of the Year award – remarkable for a campaign that ended in such collective ignominy.

It's hard to find anyone who doesn't have a soft spot for Juninho. The diminutive Brazil international helped Middlesbrough to both the League and FA Cup finals in his second season on Teesside, but the three points they were deducted for cancelling a game in December proved to be fatal.

A 1-1 draw with Leeds on the final day wasn't enough to keep them up and reduced Juninho to tears, securing his place in the hearts of Boro fans forever.

READ THIS Middlesbrough 1996/97: rucks, relegation, cup finals… and training at a prison

Nowadays, 42 points would probably guarantee a comfortable mid-table finish. In 2003, it meant relegation for West Ham.

In a team chock-full of talent (think Michael Carrick, Jermain Defoe, Joe Cole), it was Di Canio who stood out as a true superstar. The enigmatic Italian had fallen out with manager Glenn Roeder earlier in the season, but rediscovered some form under caretaker Trevor Brooking towards the end of the campaign. Even then, nine goals in 18 matches weren't enough to save West Ham.

Younger readers may only recognise as Keane as that terrifyingly grumpy assistant manager, but once upon a time he was one of the most promising youngsters in world football. His efforts in the inaugural Premier League season for Forest attracted attention from the division's top sides, but he was unable to drag Brian Clough's side out of danger despite earning a spot in the PFA Team of the Year.

Keane joined Manchester United that summer – a move that worked out rather well for both player and club.

QUIZ! Can you name the 50 highest Premier League scorers of all time?