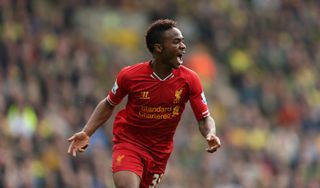 While Daniel Sturridge is among the nominees for Young Player of the Year (he turns 25 in September - by which age Ronaldo had already won World Player of the Year twice) and Eden Hazard appears the bookmakers' early favourite, Raheem Sterling has certainly done his chances no harm over the last few weeks. The manner in which he has stepped up in big, title-deciding games against Manchester City and Norwich confirms the England international's place as one of Europe's brightest young talents - something Liverpool manager Brendan Rodgers was quick to talk up after yet another brilliant display from the teenager.

Title-winning teams can usually never rely on just one or two men. To be the best over a 38 game campaign requires a collective effort. Luis Suarez and Sturridge were not the game's leading lights in the 3-2 win against Manchester City and Sturridge was missing through injury against Norwich, but in their absence Sterling showed that his early potential was no flash in the pan and that he has the mettle to deliver for his side in big games. Sterling bagged an assist, hit two classy, potentially title-winning goals, and was a threat to Norwich throughout. This after his brilliant bamboozling of Joe Hart and Vincent Kompany to score the opening goal against City last weekend.

"He is the best young player in European football at the moment," Rodgers raved. "At 19 years of age you don't see anyone better. His intelligence with the ball, his movement and he's scoring goals. His first goal was a wonderful strike. He's just shifted it, got his shot off; to beat a goalkeeper of John Ruddy's quality shows you the quality of the strike.

"His pass for Luis' goal was like a top midfield player. His overall performance [has] shown so much maturity."

A fit and firing Sterling is a hugely exciting prospect for Liverpool. It could be for England, too.

The beginning of the end of Moyes at United?

There was a moment in the 81st minute of Manchester United's 2-0 defeat at Everton that neatly summed up the woes of the dethroned champions this season. On as a substitute and bright and alert, Javier Hernandez called to Chris Smalling to receive a quick high pass down the right channel into space behind Everton's defence. Instead, Smalling sliced the ball out for a throw. Hernandez jutted both index fingers out to his forehead enthusiastically, imploring Smalling and his team-mates to concentrate.

Seconds later Hernandez then made another clever run in behind hoping to receive a pass, but United instead dithered in midfield. The moment was lost. Hernandez threw his arms out in frustration and looked to the heavens with a resigned sigh, the enthusiasm almost visibly draining from his body. He carried on making runs, as positive a pea as ever, but these were two telling gestures. Very little is working for United at the moment and they look like a club in disarray, cohesion and communication in absentia, a ship sinking before our very eyes.

If we take the ship analogy to its conclusion, then while United sink the captain, rather strangely, appears to be telling everyone to keep calm - insisting the ship is safely headed to its destination while the water steadily rises around his ankles. Defeat at Goodison Park means United are now guaranteed to record their lowest points total since 1990-91, they've claimed just six points from their 12 games against the top six this season and for the first time in the club's history Everton, Liverpool and Manchester City have all done the double over United in a top-flight season.

United failed to register a single shot on target in the first half, yet Moyes insisted there was no way his side deserved to go in 2-0 down to Everton at half time. The dressing room unrest continues to grow - add Danny Welbeck to the list of moody men, if weekend reports are to be believed (though Moyes denied Welbeck was unhappy) and while United struggled for any leadership on the field at Goodison, three of the club's most experienced players - Rio Ferdinand, Nemanja Vidic and Patrice Evra - were nowhere to be seen.

Alongside Liverpool's rise, Manchester United's rapid decline has arguably been the story of the season. Widespread reports that Moyes is about to be sacked suggest this dismal defeat may well be the start of the final chapter.

As touched on in our press box analysis of Everton 2-0 Manchester United, Roberto Martinez's strategy against the Red Devils worked a treat. Everton sat back and waited to pick their moments, then flew forward on the counter-attack, much to their Spanish gaffer's delight as he threw in as many superlatives to describe their counter-attacking flair as possible ("devastating" "electrifying" etc).

A key reason Everton were able to execute this strategy so perfectly was because of the work put in by two relatively unsung heroes of this Toffees team - Gareth Barry and James McCarthy. The duo have been chief protagonists in Everton's rise this term. In big games this season Martinez has used the pair as a defensive block that sits in front of the two centre backs and offers an extra barrier for opponents to get through en route to goal.

Both are comfortable on the ball, intelligent enough to cover Everton's flying full-backs Leighton Baines and Seamus Coleman and fiercely committed. Against United both were in the game's top five for ball recoveries, and whenever the visitors entered that central area of the field Barry and McCarthy pounced, leaping into the tackle and, more often than not, winning back possession to launch the counter.

"We deserve a bit of credit in terms of how we defended," insisted Martinez post-match. "We defended really well as a team." Barry and McCarthy should take as much credit for the victory as anyone.

Arsene Wenger said something rather telling during his post-match interview after Arsenal's 3-1 win over West Ham last week. "The good thing about this part of the season is we know what we have to do. "We know we have to win our games and hope that Everton will slip up somewhere. Let's focus on our job and not look too much at Everton."

Everton may have briefly posed a threat to Arsenal's top four status, before a surprise 3-2 defeat at home to Crystal Palace dented their hopes, but Arsenal appear to have developed a knack of improving once the pressure is off in recent seasons. Following FA Cup semi-final elation against Wigan, Arsenal have seen off both West Ham and Hull rather comfortably, casually dispatching their cup final opponents without too much fuss, 3-0 at the KC Stadium at the weekend. And focussing on their job is something Arsenal do rather well during the latter part of the season, when the pressures of being in a nerve-wracking title race fade.

Last season Arsenal won 8 of their last 10 league games after a 2-1 defeat at Spurs in March had put even hopes of finishing fourth in real jeopardy. The season before the Gunners went on a run of 8 wins from 9 games between February and April, but only after disappointing defeats in the Champions League (4-0 in Milan) and FA Cup (2-0 to Sunderland) had all but ended their hopes of winning a trophy.

With four games to go against Newcastle, West Brom, Norwich and Hull in the FA Cup final, you wouldn't put it past Wenger's team to once again find the focus to win all four games - particularly now the excellent Aaron Ramsey is back to put in fine performances like that against Hull in which he grabbed a goal and an assist.