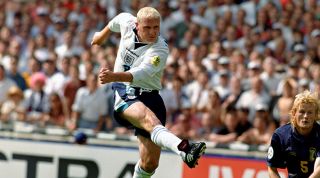 Hardly high style: thanks to the baggy mid-90s trend, the shirts were absolutely ginormous, making beanpoles like Darren Anderton and Steve McManaman look like they’d just run through a sheet on their mum’s washing line. The centralised badge and Umbro logo is fairly basic, too – but it remains one of England’s most fondly remembered efforts thanks to a glorious summer performance from the Three Lions at Euro ’96.

Get it: 3Retro • Amazon • Sports Direct

If an England shirt could take your nan down the road to vote for Brexit, it’d be this one. Featuring the most patriotic shoulders possible – as if the players’ children had draped small St George’s crosses over dad’s back – it still somehow looked pretty sweet, and was apparently the exact same shade of red as the ’66 final shirt.

Remember Wayne Rooney going into aggro mode after England’s dire 0-0 draw with Algeria at South Africa 2010 – “Nice to see your own fans booing you”? At least he looked terrific as well as grumpy in this very workable Umbro number.

The best classic football shirts that you need in your life

The 20 best Premier League shirts EVER

A classy neckline and pale stripes gave this top a businesslike feel, and business was also reasonably good for the garments’ occupants – especially Gaz Lineker, who won the 1986 World Cup Golden Boot wearing one.

Get it: 3Retro • Sports Direct

A staple eighties England shirt, this has been boosted in the public perception by that famous pic of Terry Butcher: bandage around head, dripping in claret after either fighting off numerous wild animals or bonking his head during a 1989 World Cup qualifier with Sweden. “I needed seven stitches in the wound, the problem was that the doc did only five,” recalled the defender. “But if Bobby Robson had substituted me, I’d have hit him.”

England won something in this! True, just the 1997 Tournoi de France, but it was easy to mentally substitute the ’98 World Cup trophy for the weird footy gong that Alan Shearer held aloft afterwards in the mind’s eye. Alas, France ’98 didn’t quite go to plan, but their clobber looked reasonable, and even the subtle flag pattern embedded in the design wasn’t overkill.

A post-war peach: plain, with long sleeves (usually rolled up to the elbow), a giant button-up collar and a simple badge, the Brylcreemed likes of Billy Wright and Tom Finney looked pretty splendid. Oddly, the badge sometimes featured an eleventh Tudor rose dotted amid the lions (there are usually just 10).

Umbro churned out some rank England shirts, but this was a pearl: moving on from the 1990s over-meddling, it was a simple and striking red, and with an England flag collar that was nicely understated. Reversible, too.

Enjoy a good old moan about England being rubbish these days? Then you’d have loved the 1970s, in which the Three Lions didn’t even qualify for two World Cups (1974 and 1978) or the 1976 European Championship. Which is a shame, really, because they had a lovely Admiral shirt, with pleasingly striped sleeves (a rarity for England, who have curiously never had an adidas top) and a great, discotheque-ready collar.

A true fashionista might pop this one in pole position: it was designed by Peter Saville, the genius behind album covers for Joy Division, Roxy Music, Brian Eno, Peter Gabriel, Pulp and Suede. And it really was a thing to behold, with red, blue, green and purple crosses dotted on the shoulders, a tasteful collar, and royal blue highlights.

Perhaps we’re missing something, but it doesn’t seem too taxing being a Nike shirt designer at the moment: simply drag a Photoshop swoosh and a country badge onto a plain tee, tinker with the neck a little bit, and it’s pub o’ clock. But sometimes less is more, and the lazy sods have undoubtedly produced a striking top worthy of glory right here.

Get it: Amazon • Sports Direct

Most famously pictured being used as a snot rag by a very upset Geordie, the Italia ’90 shirt of Gazza, Lineker, Platt and company has stood the test of time well – the slightly flammable looking material and subtle zig-zags give it an unmistakable but pleasant early-nineties feel.

England didn’t lose a game at Spain ’82, beating France, Czechoslovakia and Kuwait in the first group stage, but missing out on advancing from the second stage after two frustrating goalless draws at the Bernabeu against West Germany and Spain. At least they looked like winners, thanks to a cracking Admiral effort with a glorious v-neck straddled by blue and red shoulder flanks.

Ranked! Every England manager from worst to best

England kits have rarely been cool – you don’t see many down at Dulwich Hamlet with their occupant ordering a craft beer – but this one undoubtedly was, mainly thanks to Barney Sumner from New Order popping it on for history’s only acceptable England song, World In Motion (remember: that's abuse to Nick Moore, please – Ed.). Despite being Manchester City blue and covered in the Umbro diamond formation that besmirched many other kits, it just worked. England never wore it at Italia ’90, mind – and in fact donned it only once, against Turkey a year later. A shame.

Get it: Kitbag • Amazon

Does this kit deserve a place at the top of the pile simply because it was worn during the only real moment of unbridled English footballing success ever, thus cementing it into the cortex of every Three Lions fan who has gazed upon the image of a fresh-faced Bobby Moore holding the trophy aloft on his mate’s shoulders? Or does it deserve it simply because it’s a design classic, pure and simple?

A bit of both, probably: if England had been a horrible bunch of cloggers at ’66, this would still have been a beautiful, uncluttered and striking piece of work – but it can’t be separated from its context, and nor need it be. Not everything was better in the sixties – just look at the dentistry on show in the pic – but the image takes us to a happy place, and not many other England kits can do that. A winner.

Get it: 3Retro • Amazon • Sports Direct

FEATURE Making ‘The Impossible Job’: FourFourTwo's inside story from the men involved

QUIZ! Can you name the line-ups from the last two England B team matches?