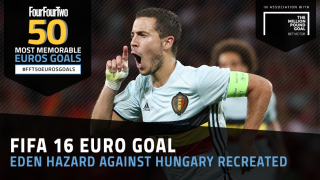 Belgium ultimately disappointed on the big stage again after looking like they might have found the formula for success at Euro 2016. A 4-0 trouncing of Hungary in their round of 16 knockout game looked to be the turning point, as Chelsea's Eden Hazard showed another glimpse of his 2014-15 form.

With time winding down the Belgium star slalomed past several tackles before smashing the ball home from outside the area. It was a superb score and capped a magnificent display (even if the Red Devils did go on to be vanquished from Euro 2016 by Wales)..

We've recreated the Chelsea man's super goal in FIFA 16 (thanks to the brilliant Bateson87). Pop back for more recreated goals soon.