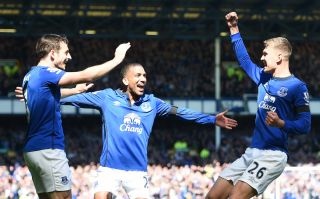 Analyse it with Stats Zone

Manchester United arrived at Goodison Park looking to reclaim second spot but conceded early, lacked penetration and ended well-beaten by an Everton side who have now collected 16 points from the last 18.

The Toffees were two up at the turn, through a pair of unusual sources. Crowning a fifth-minute counter-attack from a United corner, James McCarthy bundled through to stab home his third goal in 72 Everton games. And although United controlled the ball thereafter, using their 65%+ possession to complete twice as many passes as their hosts, they were much less accurate in front of goal, troubling Tim Howard with just 4 of their 17 attempts.

By contrast Everton were dead-eyed from 7 of their 9 attempts – including the second goal, powered home from a near-post corner by John Stones, marking his 50th Toffees game with his first goal.

Louis van Gaal replaced the ineffectual (and already booked) Marouane Fellaini with Radamel Falcao at half-time then Juan Mata with Angel Di Maria, but with 15 to go it was Everton's sub Kevin Mirallas who bagged the third, running onto Ross Barkley's through-ball to complete a counter-attack – although the visitors can justifiably claim confusion that Romelu Lukaku was adjudged not to be interfering with play.

United's Colombian did fire home thereafter, but was denied by an offside flag, and Everton saw out their biggest win over the Old Trafford outfit in 23 years. The Toffees are back in the top half, and the Red Devils – although apparently safe in the top four – suffer their second successive demoralising defeat.