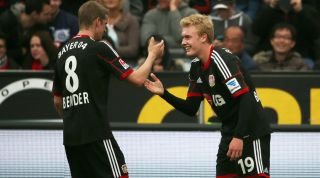 Julian Brandt is the latest package to drop off the ever-revolving conveyor belt of prodigious German talent. The Bremen-born star joined Bayer Leverkusen after the winter break in January last season, after spending two impressive years in Wolfsburg's youth ranks.

Having already sampled Champions League football, twice as a substitute against PSG last term, the Germany Under-19 youngster has settled well in the Rhineland. It took him until his seventh game to net his first goal against Hamburg, but he followed that up with another the following week – a glorious lob against Hertha which earned Leverkusen all three points.

Brandt, and Bayer, are clearly sure of his abilities: he joined them on a five-and-a-half-year deal based on the promise of regular first-team football. Despite only recently turning 18, he may well get it next season. So far it's been a good summer for the youngster, who after seeing his nation lift the World Cup was part of the German U19 side which claimed European Championship glory in Hungary.

Standing out among so many other highly rated German kids, Brandt is considered one of the Bundesliga’s most promising wingers. At youth level he plundered 27 goals in 48 games over two seasons for Wolfsburg (enough to help his side win the youth league), and has proven capable of transferring his net-rippling to the big time. Last season he provided genuine competition for South Korean star Son Heung-Min, who didn't quite kick on as was hoped in his first year in Leverkusen.

He'll be playing under a new manager next season – Roger Schmidt has replaced now-Brighton boss Sami Hyypia permanently – but his chances of making an impact won't be lessened. Schmidt proved his willingness to give youth a chance during his two-year spell at RB Salzburg.

Having netted 10 goals in 32 games at various levels for Die Mannschaft, and provided 11 assists in the first half of last season for Wolfsburg's U19s, Brandt's all-round attacking game is strong. The teenager is a two-footed speed merchant, excellent in tight spaces and also stronger than he looks, at 6ft tall and over 12 stone.

Brandt himself has acknowledged that his "defensive work and heading ability" are areas in need of improvement. In the Bundesliga, where goals certainly aren't at a premium, working on these areas of his game is important.

Leverkusen sporting director Rudi Voller wasn't exaggerating when he said Brandt was "one of the most talented players in German football". "His signature is a great investment for the future," concluded the former Germany international.

The player himself, meanwhile, is not getting carried away. "I've still got my feet on the ground," he said. "My father helped me look for the club with the best prospects on the pitch. The club is brilliantly organised and the team is great. I've no regrets."

Despite his obvious talents, Brandt began an apprenticeship as an office administrator during his time at Wolfsburg. "It was interesting, but also time-consuming," he admitted in an interview with German newspaper Express.

Chelsea were reportedly keen to snap up the wunderkind before his move to the BayArena (as were Bayern Munich and Borussia Dortmund), but the 18-year-old avoided a loan move to Vitesse and is thriving in his homeland. Bayer Leverkusen will have to negotiate a play-off to reach the Champions League this season, and long-term it's that regular European football that will be key to keeping hold of their prodigious playmaker. Further forward, expect to see him helping Germany defend their crown at Russia 2018.