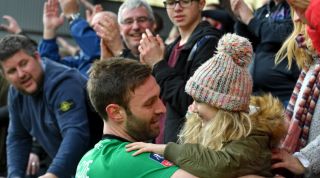 This is the furthest stage that a non-league team has reached in the FA Cup since 1911/12 (Swindon, semi-finals).

It would be a mistake to present Lincoln's win as act of the footballing Gods, because they worked extremely hard, defended very well, and were fully deserving of their place in the quarter-finals. There was no mystical quality to anything which happened at Turf Moor and neither were Burnley upended by anything supernatural. What a compliment: to go to a Premier League ground and win on merit. Hearty congratulations to Lincoln City.

There was some unpleasantness to the afternoon, dealt with further down the page, but this was a game which warmed the soul. Not all of Lincoln's players look like modern footballers and the uninhibited celebrations at full-time represented a further bucking of the game's banal contemporary trends. What they achieved was novel and charming, of course, but it was also invigorating; try to watch Sean Raggett's goal again without smiling to yourself.

That's how football is supposed to look.

Millwall beat the reigning top-flight champion for the first time since 1927 (3-1 vs Huddersfield in the FA Cup).

As readers of the Guardian will know thanks to Barney Ronay's valuable reporting, Millwall have been fighting a different kind of battle this season. The New Den, scene of Saturday's dramtic final-minute victory over Leicester, had been placed under threat by Lewisham's Labour Council and their decision to approve plans for the compulsory purchase of the surrounding land – making Millwall, as tenants rather than owners, perilously vulnerable.

Thanks to some tireless supporter lobbying and useful press coverage, the battle seems to have been won, but to talk of Millwall in pure football terms is still a relief.

As far as notable FA Cup victories go, this was of the more predictable variety. Leicester are a husk of a team, low-hanging fruit for a Millwall side who have pulsed with commitment throughout the tournament. Regardless, history will record that Neil Harris still coached his player beyond the defending Premier League champions and that he did so having lost a man to a red card – in the 52nd minute.

Anybody hoping that this weekend's results will change the way future FA Cups are televised will be disappointed. Commercial imperatives mean that Manchester United and Arsenal will always attract the cameras and, consequently, maintain the competition's reputation for stale, non-competitive games.

But the past few days have still provided a jolt. The cup's allure relies on hope rather than expectation, so these recent examples (Oxford United's gallant defeat included) partly dispel the belief that the competition has lost its ability to humble.

Now, when Gary Lineker or Jake Humphrey look down the lens at you and rhetorically ask whether the FA Cup has lost its magic, it will be that much harder to sneer.

Television doesn't need to regularly deliver Lincoln-type results, it only requires that the viewer believes them to be possible.

Barton's attempt to manufacture a red card for Lincoln's Matt Rhead has mercifully been eclipsed by the surrounding story. However, it still appeared to be a transparently premeditated act of cheating for which Barton deserves heavy censure.

Playing professional sport does sometimes result in athletes taking leave of their senses, but the (apparently) plotted aspect to the Barton incident made it toe-curling to watch. Not everything should be assessed through the "think of the children" prism, but this set a dreadful example and demands swift, fierce retrospective action. That it occured within the context of an FA Cup game is not really relevant, nor is the involvement of a non-league player, because it didn't belong on any pitch, in any competition, or during any era.

People have different attitudes towards the various forms of simulation, but most will surely agree that this was particularly egregious. Barton denies any wrongdoing and offered a tenuous explanation for his actions on social media, but anybody who watched the game will know what they saw.

Although separate from the Barton issue, his actions were indicative of his team's attitude: on Saturday, Burnley looked for shortcuts and ultimately weren't prepared to match what their opponents were willing to give to the occasion. Given all the advantages they held over Lincoln (their resources, their facilities, the size of their squad and their top-flight experience) this was a multi-faceted failure which deserves to stain the club's footballing reputation.

It seems likely that they will avoid Premier League relegation this season and that will be an admirable achievement. Nevertheless, it won't provide a whitewash over this weekend or the lack of professionalism at its root.

Well, that's one way to send a message.

With Tottenham 3-0 up at Craven Cottage, Pochettino removed Harry Kane and replaced him with Moussa Sissoko. Against a beaten opponent, this would have been an excellent opportunity for Janssen to score his first open-play goal for Spurs and to begin repairing his shattered shelf-belief. That Pochettino turned to Sissoko, a player who himself has hardly earned his minutes, was a vivid portrayal of the diminishing trust the manager has in his £18m forward.

These are worrying times for Janssen. Between now and the end of the season, there are few games in which he can realistically expect to start. With FA Cup quarter-final qualification secured, Pochettino may well deprioritse the Europa League and periodicially rest Harry Kane. On current evidence, however, Janssen isn't even the second choice striker in a two-forward squad.

- Middlesbrough vs Huddersfield or Manchester City