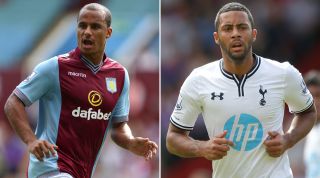 Villa's Boys vs Villas-Boas. Check Twitter, this joke will be made by 4pm Sunday.

Spurs will have spent the last two weeks having nightmares about their 3-0 shellacking at the hands of West Ham, so the prospect of lining up against another claret-and-blue outfit will probably leave them in a cold sweat.

Not that it should, as Spurs have an impressive recent record against Villa – they’re unbeaten in their previous 10 meetings and have won the last two clashes in the West Midlands 4-0.

The most recent of those victories – a League Cup tie just last month – saw Jermain Defoe score twice, and the England striker’s place in the Spurs starting XI is currently the source of much debate.

Roberto Soldado is yet to score from open play in the Premier League, and the England striker is now heaping on the pressure.

Aston Villa’s striking options are far more straightforward – if Christian Benteke is back fit, he’ll play. The Belgian has missed Villa’s last three matches, but is now close to a return following the international break.

The striker is clearly Villa’s biggest attacking threat, although Paul Lambert’s side did manage to score three goals against Manchester City in his absence.

Until that defeat to West Ham, Spurs boasted the joint-best defensive record in the league, with just two goals conceded in their first six matches. Their back four – including Benteke’s countryman, Jan Vertonghen – will have a point to prove when they return to league action. Spurs can’t afford to drop points too frivolously, with the race for a top four spot looking like being tighter than ever.

If Benteke returns, Libor Kozak is likely to drop down to the bench, and Villa could return to the 4-3-3 system often used last season.

Tottenham may welcome back Aaron Lennon, although the winger will most likely start on the subs bench at best. Etienne Capoue (ankle) is still out.

Agbonlahor has started the new season brightly. He may not yet have scored a Premier League goal, but he has been a consistent creative force, largely operating out on the left.

He could expose any gaps left by Walker, who is as attack-minded a full-back as you’re likely to find.

Lambert played at the highest level as a player – winning the Champions League in 1997 with Dortmund, before featuring in the 1998 World Cup with Scotland – before rising through English football’s lower leagues as a manager. AVB, meanwhile, pretty much jumped in to managing in Portugal’s top flight with little, if any, playing experience to speak of.

The Portuguese has won four of his five of his meetings with the Scot – one with Chelsea (vs Norwich), three with Tottenham (vs Villa). The other match – between Norwich at Chelsea in January 2012 – ended 0-0.

A cagey affair, with Spurs coming back to secure a point. 1-1.