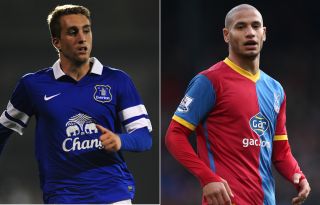 An important game for two teams at opposite ends of the table.

A feeling of frustration lingers at Everton in the aftermath of their 1-0 defeat at Tottenham on Sunday. Though they played well in spells - particularly in an enterprising first half during which Roberto Martinez was left to lament Hugo Lloris' Stretch Armstrong-like tendencies - ultimately they created very little and went down to one of Spurs' two shots on target.

Martinez regretted his side switching off from the free-kick that led to Emmanuel Adebayor's winner, while also touching on their problems in forward areas, in the absence of nine-goal loanee Romelu Lukaku. Take the burly Belgian out of the equation and the Toffees' next two top scorers are Kevin Mirallas and a right-back, Seamus Coleman. "We're struggling a little bit at the moment," Phil Jagielka admitted, referring to Everton's problems in attack. After dropping down to sixth following two defeats in three games, a pick-me-up is needed against Crystal Palace.

The visitors themselves are in great form and now sit in 14th after a run of six wins from their last 13 Premier League games. Tony Pulis has worked wonders so far at Selhurst Park, as we touched on in our Weekend Debrief, and with Tom Ince and Joe Ledley both making scoring debuts in the 3-1 win over West Brom last weekend, the reasons to be a happy Eagle pile up.

Without wanting to spoil the party, however, precaution is still required. Palace remain just three points ahead of the bottom three with a far worse goal difference than 18th-placed West Brom. With games at Everton and at home to Manchester United to come (not that the latter seems to scare anyone these days if Dan Burn is to be believed), just two bad results could leave Palace's general outlook - not to mention league position - looking much bleaker.

It's that stage of the season where teams need points over performances now, and with both sides weak in certain areas this could be a far closer game than you might imagine at first glance.

Pulis has no injuries and several options to choose from having strengthened his squad in January.

Everton will be without Lukaku, Antolin Alcaraz, Darron Gibson and Bryan Oviedo, but Lacina Traore continues to step up his rehabilitation from a hamstring injury and could feature.

The return of Barcelona whiz-kid Deulofeu from injury could be just the tonic for an Everton side currently struggling for a bit of whip and snap. The 19-year-old's hamstring injury came at an unfortunate time for those of us who enjoy watching exciting flair players. Deulofeu looked as if he was gradually adapting to the rigours of the Premier League and had put in some impressive performances, including a goal and assist against Stoke and that wonderful bullet of an equaliser against Arsenal at the Emirates. Just two games later he sustained the injury, but is back now to aid the Toffees' Champions League push after appearing as a late sub at Spurs.

“I am really, really happy to be back. I have been doing my rehab in Barcelona but I am happy to be back at Everton," Deulofeu told Everton's official website. “My leg felt great, absolutely perfect. I have been working around the clock to get fit and get strength back in the leg. The main thing now is to keep working hard so I don’t get any relapse.” He could feature against Palace, which should help ease the burden of creative expectation on the shoulders of Mirallas, Steven Naismith & Co.

Martinez vs Pulis, purist vs punt-it merchant, style vs stodge. That's how some will try and portray this particular managerial battle, but that doesn't necessarily mean it's true. You need only look at which manager of the two has been playing two strikers up front for much of the season to find a simple counterweight to the easy stereotype.

What is certain, though, is that both managers have done commendable jobs in this first season at their new clubs, and both currently enjoy the respect and admiration of their supporters.