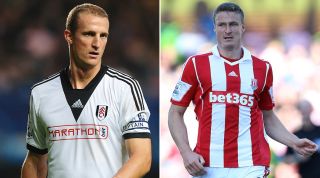 Fulham fans are suffering from ‘same old story’ syndrome. It had all started so well with an opening day away success at Sunderland – only their 35th in 231 Premier League trips – but what was once ‘Fortress Craven Cottage’ has turned into a house of horrors. Last weekend’s defeat to Cardiff was Fulham’s sixth in their last seven at home, their longest winless run in the top flight since 1966, and late goals are continuing to cost the Cottagers dear.

Jordon Mutch’s 25-yarder meant Fulham have conceded in the 84th minute or later for four successive league matches, with manager Martin Jol calling on his team to tighten up if they are to get anywhere in the coming weeks. As ambitious new American owner Shahid Khan watches on and supporters voice their discontent, the Dutchman knows he needs a result fast, and he could pick up some much-needed kudos by getting one over a Fulham hate figure.

Mark Hughes had led Fulham to eighth in the table and a Europa League spot in 2010/11. But he left fans angered and dismayed by resigning less than a year into the job, claiming the club’s ambitions “just to stay in the Premier League” did not match his own. A tumultuous 10-month tenure at nearby QPR followed, but Hughes is having more fun further north as he steadily transforms Stoke.

The Potters head to the capital knowing they shouldn’t have too much trouble improving on their last performance. A soporific display, in which they recorded just a single – and tame – shot on target, saw them lose 1-0 at home to Norwich. “We were below par," said Hughes. "This is a Premier League game and we need players to perform. We never got any pace or power into our game which is unlike us.”

Indeed, Stoke made almost as many passes as Arsenal at the Emirates, ironically being undone by three set-pieces. They will look to their previous trip to London for inspiration, after beating West Ham.

Scott Parker lasted just seven minutes of Fulham’s defeat to Cardiff and the Cottagers missed his assurance in midfield. Ashkan Dejagah, Matthew Briggs and Maarten Stekelenburg remain sidelined but Aaron Hughes may be back after a groin problem. The defender has not featured since the 1-0 defeat at Newcastle.

Stoke winger Matthew Etherington, who scored the winner the last time Stoke won away at Fulham, missed the defeat to Norwich with whiplash after being involved in a car accident, while Jamie Ness has a thigh injury.

N’Zonzi continues to have a standout season for Stoke. The former Blackburn man has been the Potters’ best passer in all but one of their league games and was even the best passer on the pitch at Emirates Stadium two weekends ago. In the expected absence of Scott Parker it will be down to Steve Sidwell and wily Greek veteran Karagounis to win the midfield battle that may well determine the overall victor.

The 36-year-old replaced the injured Parker against Cardiff and was second only to Gary Medel in the passing stakes, as well as making 6 ball recoveries. In Fulham’s 3-1 defeat to Arsenal in August, Karagounis came on after 75 minutes but still ended the game as the Cottagers’ best tackler.

Jol holds the upper hand over Hughes with three wins, while the Welshman has yet to defeat his Dutch counterpart in seven meetings – the most recent a 1-0 Fulham win at Loftus Road in February 2012. The previous six were all Spurs-Blackburn encounters.

Jol needs his hoodoo over Hughes to continue, having felt the wrath of the Fulham faithful after last week’s reverse. "They [the fans] expect us to do better. If you are in the bottom three or bottom five – even if it's early in the season - you get pressure. I take responsibility."

This fixture has been good to Fulham in the past, with seven wins in the last eight meetings at Craven Cottage. But the other match in that sequence was a 1-0 Stoke win in May 2010 with Matthew Etherington scoring after 83 minutes, and it wouldn’t be a huge surprise if lightning struck twice to hand villain Hughes the points.