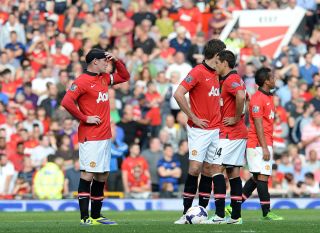 1) Moyes' boys let the side down

Occasionally, when hacks reach for the history books, it's very good news for a record-breaking manager. Not for David Moyes, though. Manchester United have had their worst league start since the Thatcher era, thanks to their first home loss to West Brom since the Iron Lady was leader of the Opposition.

Credit should be given to the Baggies, who prospered through recent additions Stephane Sessegnon and Morgan Amalfitano, with the winner scored by rising star Saido Berahino. But the names on everyone's lips are mainly Manchester-based. Besides Moyes and Sir Alex Ferguson, whose success hangs like a fist over his fellow Glaswegian, several players came under heavy discussion.

After criticism over his lack of rotation, and with a long trip to Donetsk looming, Moyes analysed the team battered by Manchester City the previous weekend and made seven changes. Arguably, not one of them worked. Phil Jones, Jonny Evans and Alex Buttner came into a back four that played like strangers, while somewhere in front of them, Anderson aimlessly ambled around in midfield before being put out of Old Trafford's misery shortly after West Brom went back in front.

The three incoming attackers fared no better. Nani showed his increasingly frequent combination of unfulfilled promise and incomplete crosses. Up top, Javier Hernandez lasted less than an hour, managing a sole touch in the penalty area, before being replaced by the sorely missed but clearly unready Robin van Persie.

The final new boy, Shinji Kagawa, didn't even emerge for the second half. While he has been out of the team, the former Borussia Dortmund player's reputation has grown beyond measure, but Kagawa hardly sparkled and was replaced on the left by the teenaged Adnan Januzaj.

Whenever a team struggles, fingers point at the manager; sometimes the players get away with less derision than their displays deserve, although the usual response to this theory is that those on the pitch respond to their guidance off it. Moyes is clearly in the process of learning about his squad, and his comments that United lack the "five or six world-class players" needed to win the Champions League show a man unhappy with his lot despite inheriting a title-winning squad. (GP)

2) Mata makes his (and Chelsea's) point

Aside from the relationship between the two managers, much of Saturday's derby build-up between Tottenham Hotspur and Chelsea centred on the continued exclusion of Spanish string-puller Juan Mata.

Jose Mourinho was yet to be convinced by the playmaker's ability to track back and aid his team defensively; something Mata was happy to improve on:

"My dad always said to me, 'if you are left-footed, improve with your right'. I have to improve defensively too. I think Jose can help me," he said.

Mata had to settle for a place on the bench against Spurs, but Chelsea's insipid first half showing offered him the chance to impress upon the restart.

Although deployed predominantly on the right, the 25-year-old's impact was hugely significant in Chelsea leaving White Hart Lane with a point.

The schemer soon had a goal ruled out for offside, but later whipped in the free-kick that John Terry glanced home to bag the Blues a point.

But arguably one of his most telling contributions came defensively. The potentially crucial tackle he made, after tracking back to cover for the advanced Branislav Ivanovic, shortly before the equaliser probably pleased his manager more than any of the attacking attributes displayed.

"I think this is the way players have to say ‘I want to play’,” said Mourinho. “‘Blah, blah, blah’ is not good, conversations with the media is not good, agents talking is not good.

“Good is this – the effort he made against Swindon and the way he changed the team in the second half. I’m a very happy man to say 72 hours in advance he will play against Steaua Bucharest.” (GD)

Fulham have always been polite Premier League house-guests: with 35 away wins in 231 attempts, they have averaged under three away wins per season since rejoining the elite in 2001, and have been survived - or thrived - on the back of their home form.

Trouble is, visitors to Craven Cottage are now getting just as comfortable. Martin Jol's side have lost six of their last seven home league games, and while there's no humiliation in getting beaten by Arsenal or being held by West Brom's injury-time equaliser, there was something worryingly crushing about conceding a late winner to promoted Cardiff, who now have double Fulham's points total: since that one-shot, one-goal opening-day win at Sunderland, Jol's men have gained just one point from a possible 15.

One problem is that Fulham always give their guests a goal: they've only kept one clean sheet at the Cottage in 18 league attempts. That wouldn't matter so much if they were bagging goals, but they're not, scoring four in nine hours. (Nor is this a new problem: they went from March 2 to May 4 without scoring a league goal bar Fabian Delph's OG.)

Most relegation battlers - and let's make no bones, that's what Fulham are now - would give their West Stand to have Dimitar Berbatov and Darren Bent up front. However, despite the two ex-Tottenham team-mates both scoring in the midweek League Cup win over Everton, they simply didn't dovetail against Cardiff: excluding kick-offs, Berbatov passed to Bent just twice and vice-versa once.

Worryingly for Jol, this is also becoming a trend: the only other time Bent and Berba started together, at Newcastle, the Bulgarian passed to the Englishman just once in a display so woeful it was widely ridiculed. Adding in Bent's sub appearance against Arsenal, the odd couple have played together for over three hours, and Berbatov has found his team-mate three times from open play.

Fulham weren't helped by the early injury to Scott Parker, a good signing who will be surprised to find himself in a dropzone shoutout. But their problems are at the sharp end - and could get more pointed yet. The next team at the accommodating Cottage are Stoke, a side Fulham may feel they should be above, managed by Mark Hughes, a manager they've already got rid of. Should yet another home defeat send them into the fortnight's international break drifting away from safety, new owner Shahid Khan may start to question whether Jol should remain the top flight's fourth-longest serving manager. (GP)

At the start of the season most experts predictably but understandably expected a three-horse race between Manchester United, Manchester City and Chelsea. But on Saturday the title-tipped trio gathered a single point between them.

Each manager has his ongoing problems: Jose Mourinho's lack of a top-class striker and embarrassing aversion to Juan Mata; Manuel Pellegrini's woeful away form (one fortunate point from nine); David Moyes blinking in the kind of spotlight Manchester United managers get when they limp to four points from five league games.

For the wider English game, though, it's all rather fun. Provided you don't follow any of those three teams, it's an unusual leveller to see them struggle; if you do wear their colours on your sleeve, it's reassuring to know it's not just your bunch.

Meanwhile Arsenal, Tottenham and Liverpool continue to impress, and impartial observers may dare to dream of that elusive open title race. It may not be opening up beyond the usual top-end suspects - with respect to doughty Southampton and a Hull side who may be surprised to find themselves seventh - but it's threatening to be a better battle than we've had for a while.

After all, even that bastion of duopoly over in Spain is experiencing an unusual change to the established order, with Atletico's derby win at the Bernabeu leaving el Real five points behind their city rivals, while Napoli and Roma lead the way in Italy. Perhaps the giants aren't so scary after all... (GP)