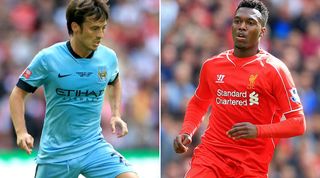 Much like death, taxes and the twice-daily Mail Online news story about Kim Kardashian’s ample behind, Sunday’s Manchester City win against Newcastle was sadly inevitable: September 2005 was the last time the Magpies beat City in the league. What follows on Monday night for City should, in theory, be a sterner test at this early stage of the season.

In beating the Toon Army 2-0, City were barely forced into third gear and it’s difficult to shake the feeling that after a second league title in three years, the Champions League is Manuel Pellegrini’s main target, after his 10-year trophy itch was definitely scratched in 2014.

But let’s leave Champions League talk to one side for now. City’s is still a squad that is exceptionally strong in the Premier League that has added defensive reinforcement in centre-back Eliaquim Mangala and defensive midfielder Fernando, a cross between Toure and Fernandinho, but not as good as either. Silva and Nasri continue to provide the creativity, while Aguero should return to partner Edin Dzeko up front. Don’t forget that last season’s 3-2 defeat at Anfield came with Toure injured inside 20 minutes and a barely half-fit Aguero coming off the bench.

Visitors Liverpool, then, travel to Manchester in a similar position to when the teams met at the Etihad last season, striving to reach City’s level. Though the Reds beat Southampton on the opening weekend, their second-half display was particularly uninspiring, allowing the Saints to dictate the play. In truth, Brendan Rodgers’ men were lucky to get three points.

A midfield two of Steven Gerrard and Lucas seems too one-paced, perhaps paving the way for Jordan Henderson’s return to the middle. Philippe Coutinho linked well with Daniel Sturridge, but greater invention from the wings is needed, which young Serbian winger Lazar Markovic could provide.

But it’s still at the back that Liverpool need most work. Javier Manquillo looked solid enough at right-back and Dejan Lovren classy on debut, but vowel-phobic Martin Skrtel still looks a lot tougher than he actually plays. Solidity must arrive soon for a proper title challenge.

Bar long-term absentee Alvaro Negredo, City have a fully-fit squad. James Milner, impressive against Liverpool last term, could feature, while Aguero is likely to start his first game of the season.

For Liverpool, Jon Flanagan, Adam Lallana, Thiago Ilori and Oussama Assaidi are all out, likely to be joined by Daniel Agger (who has a knee/wanting-to-leave injury).

Both teams may play on the deck but it could be the, albeit infrequent, aerial battle that decides this one. Undeniably impressive with the ball at his feet – Liverpool’s Croatian centre-back completed 66 of 69 passes against his former club last weekend, including 9 into the final third – Lovren won only 6 of 11 headers.

Tall and good in the air, Lovren’s Bosnian opponent has the game to trouble Liverpool’s whole back-line. His sublime backheel assist for Silva’s Newcastle goal proves he can’t half play, too. Though diminutive creators Aguero, Silva and Coutinho may get the headlines with their silky skills, it could be the winning of this aerial challenge that settles the Etihad battle.

Pellegrini and Rodgers share a similar, high-pressing, position-switching mantra that has long served them well. Such was their attacking intensity last term, it’s no wonder City and Liverpool were the Premier League’s top scorers. Both games last season were exciting affairs and it’s difficult to look beyond another 90 minutes of forward-thinking artistry and, hopefully, goals.

City to have too much going forward. 2-0.