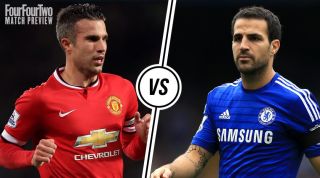 Manchester United’s first proper test of the season. Which is worrying.

It’s probably a good job Louis van Gaal has rescinded his request for people to judge him after three months. The Dutchman’s team have collected only one point more than David Moyes’ had at this stage of the season, having not yet played any of last season’s top six and signed players much better than Marouane Fellaini over the summer.

But with Chelsea, Manchester City and Arsenal coming up in the Reds’ next four matches, there’s no time quite like the present for United to start showing they’re capable of finishing in the top four this season.

“I have to say it was very stupid to say three months,” Van Gaal admitted before Monday's 2-2 draw against West Brom.

“We have to make a team, that's why I have a period of three years. I hope we can fulfil the dream. Chelsea has already a lot of time.”

Was it a tougher job that even he expected? Regardless, the Dutchman was bullish after his side came from behind to draw at The Hawthorns – and insisted they could still catch the Blues despite the current 10-point gap. “That's possible but it is difficult to say,” he declared. “But I am arrogant because I have done it a lot of times.”

Van Gaal has indeed won some stuff in his time, and not all of it straight away. It took him two seasons to end Ajax’s three-year wait for the Eredivisie title; then they won it three years running, plus the Champions League in 1995.

At Barcelona he had less time but delivered La Liga in his first two seasons. Then he transformed a relatively unfancied AZ into champions (eventually), before guiding Bayern Munich to within a whisker of Champions League glory in his first year – but not before facing the sack as early as November.

Outsmarting him in that 2010 Madrid final? Jose Mourinho of Inter, former assistant of Van Gaal at Barca. From pupil (albeit a boisterous one) to prince. Apprentice beating master in their only competitive meeting.

Mourinho’s current disciples lead the Premier League by a healthy five points, as they have done since before the international break. They’ve dropped only two points, at Manchester City, and can now be backed at a fairly paltry 16/1 with the bookmakers to remain unbeaten for the season.

But the Blues face a problem. No, not Roman’s yacht needing a deep clean, nor finding a place to put all of those Frank Lampard pictures that mysteriously need dusting (temporarily, of course). It’s actually a real thing – Jose is down to the bare bones up front.

The Portuguese had “no idea” about the status of nine-goal Diego Costa before Tuesday’s 6-0 trouncing of Maribor, while Loic Remy tweaked his groin in the process of scoring against the Slovenian side. Step forward Didier Drogba, who bagged from the penalty spot for his first goal since re-joining the Blues in the summer.

“I'm not worried,” shrugged Mourinho. “When a player is injured, play another one. We don't cry on injuries. It's our philosophy. We just think one injury means an opportunity for somebody else.”

Whatever you say, Jose. Perhaps unsurprisingly, only 14 players have started for Chelsea in the league this season, a smaller spread than any other team, while United have used 30, more than any other club...

...but finally, United’s injury woes are subsiding. Phil Jones and Ander Herrera started at The Hawthorns, while Chris Smalling, Ashley Young, Fellaini and Michael Carrick were among the substitutes. What’s more, Jonny Evans and Antonio Valencia are poised to return. Wayne Rooney serves the last of his three-game ban.

Remy has been ruled out by Mourinho, but says Costa has a "little chance, the same as [John Obi] Mikel and Ramires." Cesar Azpilicueta begins a three-game suspension after getting sent off at Selhurst Park. Andre Schurrle is expected to be back after an illness and could play up front, as he did at Old Trafford last season.

United’s defensive frailties are still plain to see, and in Hazard Chelsea have a player who’ll relish the chance to exploit them. The Belgian netted twice against Maribor in midweek, but will be especially keen to improve his league tally of two in the potential absence of Costa.

A repeat of his display against Arsenal would go some way to doing that, Hazard proved an unstoppable menace against the Gunners with his fearless running. It was his superb solo dribble that resulted in the penalty he converted himself, one of 5 productive take-ons against Arsene Wenger’s men. No player in Europe’s top five leagues has completed more this season.

Against Crystal Palace last weekend, however, Hazard struggled to impose himself. Though he completed 69 of his 75 passes, he was used more to bring others into play – note the number of backwards passes in the graphic below. A little more selfishness could put the frighteners up Rafael & Co.

When Bobby Robson moved upstairs at Barcelona to become the Catalans’ general manager in 1997, Van Gaal took the reins. But rather than move on with Robson, Mourinho was recommended to carry on as the Dutchman’s No.2. The duo struck up a strong, if sometimes testing relationship, from which developed a mutual respect. Mourinho would scout opponents, and learned from the Dutchman – who in turn learned from his right-hand man. “Finally, I wanted to hear what he had to say and ended up listening to him more than any of the assistants,” Van Gaal once said of his Portuguese protege.

But Mourinho eventually outgrew his role and stayed on for a year too long (in his words) before finally taking the plunge into management with Benfica. And we all know what happened next...

It’d be some going to produce a match as dull as last season’s 0-0 snoozefest at Old Trafford, but Mourinho is a master of stifling big-game opponents on their own patch. 1-2.