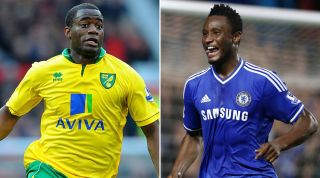 Canaries face their first major test at Carrow Road against one of the big guns.

What a difference a week makes. With Chris Hughton and Jose Mourinho in the spotlight having struggled to match pre-season expectations, both Norwich and Chelsea found their spark in tough away fixtures.

A miserly return of four points in five games was all Hughton had to show for his £25 million summer outlay, but his charges responded with a solid performance at Stoke, Jonny Howson’s low drive enough to claim three crucial points.

‘Crucial’ might sound strong so early into the campaign, but with Chelsea and Arsenal up next – and Manchester City a fortnight later – the Canaries could have been heading for the sort of slide that saw Paolo Di Canio sacked as Sunderland boss last month.

As for the Blues, they found some much-needed belief and balance during the half-time break at White Hart Lane. A goal down to Spurs and showing little attacking intent, the introduction of Juan Mata in place of the static John Obi Mikel changed the game as they fought back to earn a point.

Mourinho’s men carried on where they left off on Tuesday night, easing to a 4-0 win in Romania against Steaua Bucharest, with Mata again the architect. Seriously, Jose, you’re not going to leave him on the bench again, are you?

Norwich could again be without key defender Sebastien Bassong (hamstring), although they coped just fine without him at the Britannia Stadium, keeping only their second clean sheet in 42 Premier League away days.

For Chelsea, just hours after receiving the good news that he wouldn’t receive an extended ban for grabbing Jan Vertonghen’s face, Fernando Torres hobbled off with a damaged knee in Bucharest, which will sideline him for several weeks. Having seemingly rediscovered that explosive pace that everyone said he’d lost for good, this latest setback pretty much sums up the Spaniard’s two-and-a-half years in SW6.

Mourinho’s alternative options upfront, Samuel Eto’o and Demba Ba, are both lacking sharpness, with the decision to loan out Romelu Lukaku to Everton becoming more baffling by the week. Elsewhere for the Blues, Eden Hazard, who missed the Champions League win with a minor ankle injury, is expected to return.

The deployment of Tettey in front of the defence at Stoke gave Hughton’s back-line some much-needed reinforcement, with the Norwegian making 8 ball recoveries to deny Mark Hughes’ side.

With Mata, Oscar and Hazard to potentially deal with on Sunday, the former Rennes man won’t get a moment’s peace. In his 45 minutes against Spurs, Mata made 7 recoveries himself – the highest in the match – and provided the assist for John Terry’s headed equaliser.

Although as calm and composed as ever in post-match interviews, there’s no doubt Hughton would have been feeling the pressure in recent weeks, having been harshly sacked following a similar run of form at Newcastle in 2010.

It’s the first time the former full-back has faced Mourinho, who remains as unpredictable as ever in his press briefings. This week we’ll call him ‘The Irritable One’, after he walked out of his Champions League news conference on Monday, complaining that journalists "only ask questions about the guys who are not selected" – in this instance, Kevin De Bruyne.

Mata to inspire Chelsea to a first away win of the season in the league. 0-1.