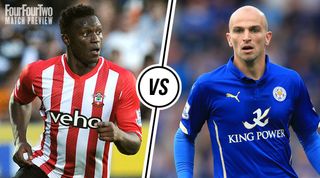 Another comfortable win for stingy Saints.

Two sides at opposite ends of the form table collide at St Mary’s as Southampton aim to pile on the misery for Leicester and continue their unlikely assault on Chelsea for the Premier League leadership.

On the other hand, there are more similarities between these two teams than first inspection suggests. Both enjoyed their moments in 1990s Premland, both were relegated, opened identical stadia, suffered the drop to League One and then forced their way back into the second tier – each event, bar third-tier promotion, happening within a year of the other side doing it.

But that’s where the similarities end. Leicester beat Southampton twice when the latter clinched promotion back to the top flight in 2011/12, but the Foxes’ lengthy period of stagnation in the years before and after meant they fell some way behind their south coast cousins. Leicester have finally made it back, but the team they last faced in January 2012 are very different these days.

Ronald Koeman’s red-hot side will already know before kick-off whether reducing the current four-point deficit behind Chelsea is possible, with the Blues heading to Anfield at lunchtime.

Regardless, Southampton’s only two defeats in a relatively kind opening run of fixtures have come at the hands of Liverpool and Tottenham. Therefore this game, and the next one against Aston Villa after the international break, are their last opportunities to stock up on points before a daunting eight game-run up to New Year’s Day pits them against both Manchester clubs, Arsenal (twice), Everton and Chelsea.

Koeman will take nothing for granted against a struggling Leicester, but he’ll have noted with glee that his high-flyers have won seven of their last eight league games and kept clean sheets in five of them. The Foxes are winless in five, goalless in four of those, and have only netted once on their travels this season. Gulp.

Over to you, then, Nigel Pearson – a man held in high regard around these parts thanks to his role in saving the Saints from relegation to the third tier in 2008 (more on that later).

Pearson rang the changes for last weekend’s somewhat unfortunate defeat to West Brom at the King Power Stadium – the East Midlanders’ first at home this season – but after his side’s bright start, he has struggled to work out how best to play the top flight’s other stubborn also-rans. Goals are in desperately short supply.

His best hope here is that his team at least defend well, as they did in their first five matches. If Leicester do that, they have a chance.

Neither of these sides have any new injury worries. Group hug? Nah, alright then. Matt Upson is back in training having recovered from a pre-season ankle injury that required surgery.

Southampton will hope the Tadic who tore apart Sunderland will be on show again as the Saints return to home soil, the Serbian having a quieter game at Hull last weekend but still managing to create a game-high 3 chances for his team.

Tadic is given free reign to roam in the opposition half (see below), which makes tracking him for 90 minutes difficult, but a wily operator like Cambiasso will have been charged with keeping quiet plenty of pesky playmakers like him before.

The cultured Argentine suffered the embarrassment of a desperately unfortunate own goal against West Brom last time out, but was Leicester’s most effective defensive player nonetheless. The 34-year-old finished the match with more interceptions than any other player (6) and 4/7 tackles won in midfield. The Foxes need his experience more than ever here.

The man they once called 'Snowflake' due to his alleged resemblance with a white gorilla at Barcelona Zoo has invigorated this hungry bunch at St Mary’s beyond even his wildest hopes. “He's pretty laid back, but not in terms of him being a pushover,” left-back Ryan Bertrand told FourFourTwo this week. “But if you're slacking in any department, he'll be the first to tell you.” Maybe nice guys do win sometimes. Leicester boss Pearson will certainly hope so, described in the latest issue of the magazine as “excellent” by striker Leo Ulloa. “His relationship with the players is very close; he cracks jokes, asks you about your family and how you are feeling.”

The Foxes chief will certainly get a warm welcome upon his return to Southampton, having taken charge of the Saints’ last 14 games of the 2007/08 campaign and guiding them to safety at Leicester’s expense.

He wasn’t kept on, though, with Southampton electing to hire Dutchmen Jan Poortvliet and (separately) Mark Wotte in a disastrous experiment ending in relegation. Pearson passed them on the way back up as League One champions with Leicester.

The shot-shy Foxes could hardly be travelling to a worse place as they aim to improve their fortunes. All things considered, it’s impossible to look past another comfortable Saints win to nil. 2-0.