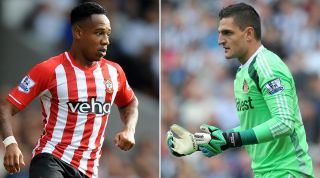 Time for some Saintly perspective?

How quickly modern football judges. If the knee-jerking basket cases who call up football phone-ins are to be believed, Ronald Koeman is the Messiah, Graziano Pellè is the new, er, Maradona, and Southampton are all set to crusade gloriously into Europe.

Granted, however you slice it, it’s been a decent start to their campaign – their best in the top flight for 31 years. But who have the south coast side beaten?

Six of their 13 points have come from swatting away genuinely risible sides – Newcastle and QPR – while another six have come from overcoming reasonable-looking Swansea and West Ham outfits.

Overexcited Saints might do well to remember that before the last international break in early September, Swansea were nestled in second position (briefly going top), and pundits were gushing about their best start in 91 years.

Since then, the Swans have reaped just two points from 12. You can go from messianic to moronic pretty quickly these days: Koeman must avoid the same post-break fate as Garry Monk.

All that said, Saints' next fixtures – Sunderland, Stoke, Hull, Leicester, Villa – look favourable to keeping the party going for a while yet.

With Pellè involved in five goals in his last five Premier League appearances (four goals, one assist), ably assisted by the likes of the marvellous Morgan Schneiderlin, Nathaniel Clyne and Jack Cork, the home side should certainly create chances.

Gus Poyet’s men, meanwhile, are desperately short of goals, especially on the road, where they’ve managed to notch just two. Not the best time, then, to line up against statistically the best defence in England: no team in the top four tiers have conceded as few as Saints (five) this season.

But Sunderland’s backline is also stingy: with just seven conceded, they have the joint second-best rearguard in the league along with Chelsea, Manchester City and Spurs. Keeper Vito Mannone has been in sparkling touch, with the best saves-to-shots ratio of any first-choice keeper in the top flight (77%).

Poyet will also be buoyed after managing his first win of the season, against Stoke, following five draws and a loss in the campaign so far. Sunderland have been defeated only once in their last six away fixtures, and the last three league meetings between these two sides has ended in a score draw, too: expect it to be tight.

Tadic has proved to be the ideal like-for-like replacement for Adam Lallana in attacking midfield. “We were looking for a similar player, and we found him,” says Koeman. And at £10 million cheaper than the price they sold the Englishman for, it’s a piece of business that can’t be praised enough.

Ex-Saints forward Gordon Hill even reckons that the Serb is an upgrade. “I’d take Tadic over Lallana,” he says. “Everything goes through him. He is part of a strong jigsaw.”

The stats back them up: the jigsaw-reinforcing winger has been involved in 60 goals (28 goals, 32 assists) in 73 league appearances (for Twente and Saints combined) since the start of 2012/13. FFT's Stats Zone shows he is particularly sharp when it comes to completing passes in the final third (against Spurs he was the third-best performer on the pitch in that regard after Christian Eriksen and Nacer Chadli, completing 10 passes from 16), and when winning the ball back – he won 4 tackles from 6 attempted. An enviable combo.

Gus and Ronald meet managerially for the first time. The two enjoyed numerous tussles during their playing days, however, with Koeman the defensive lynchpin at Barcelona between 1989 and 1995, while the Uruguayan starred as a powerful midfielder for Real Zaragoza between 1990 and 1997. Koeman had the better of their battles: he played in a 1993 fixture that the Catalans won 4-1, in which Poyet was sent off, and scored penalties in routine Barca wins in ’94 and ’95. But Gus has undoubtedly had the best memory to treasure: in February 1994 he blasted the final goal in a 6-3 demolition of the big guns that has gone down in los Blanquillos history.

All of which means exactly nil this weekend, but the legacy of playing the beautiful game in La Liga does mean that both men have a commitment to an attractive brand of football.

No picnic, but Southampton to prevail 1-0.