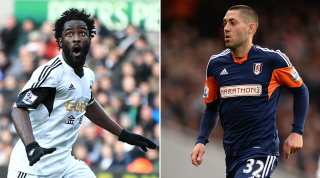 Nose-diving Swans and free-falling Fulham both fight to catch their breath.

Player scraps, police call-outs, bickering in the boardroom – it’s been like an episode of ludicrous ’90s soap Dream Team at the Liberty Stadium so far in 2014.

Swansea may still be in two cup competitions but a woeful run of league results – they have drawn three and lost five of their last eight – has seen tension escalate on the Welsh coast, to such an extent that Chico Flores and Garry Monk found themselves squaring-off over a parking space at the training ground, resulting in a “quiet word” (but thankfully no bookings) from South Wales' boys in blue. The pair have since made up (while a club statement issued this week insisted that, despite tabloid reports, "nobody was threatened with a brick") but the spat is indicative of some fraught times within the Swans camp.

Even manager Michael Laudrup, the epitome of cool, is showing signs of stress in his recent press conferences, with chairman Huw Jenkins playing hard-ball over transfer funds while the Dane battles with an ever-growing injury list. We can’t quite picture Laudrup and Jenkins getting tooled-up by the bike sheds while surrounded by bare-chested playing staff, but it’s looking highly likely that the fallout will result in the gaffer walking away come the end of the campaign, regardless of how the coming months unfold on the pitch.

In the meantime, Laudrup needs some additions before the transfer window shuts, but with the chairman not prepared to spend big, Bolton front-man David Ngog is a cut-price solution to assist Wilfried Bony. With the two clubs agreeing a deal on Monday, all that’s left is to dot the i’s, cross the t’s and hunt down the striker's missing apostrophe, last seen in 2011. Out the wing, Norwich’s Anthony Pilkington could also be on his way to South Wales in a £3 million deal.

It’s a similar tale of misery down at Craven Cottage, with west Londoners Fulham sitting two points below Swansea in the table.

There’s no doubt where Rene Meulensteen’s priorities lie in the coming months, with the Dutch manager making 11 changes for Sunday’s FA Cup draw at Sheffield United as he kept more than one eye on Tuesday’s crucial league trip over the Severn Bridge.

Inexperienced trio Josh Pressley, Chris David and Muamer Tankovic were among those to feature on a pig of a pitch at Bramall Lane, with Hugo Rodalegga saving the Prem’s sides blushes with a 75th-minute equaliser, before the offside flag denied Darren Bent some serious embarrassment after he missed the target from all of two yards. Still, it didn’t prevent Sandra Redknapp – aka ‘Arry’s missus – from popping up all over Twitter on Sunday afternoon, you cruel, cruel people.

It’s at the back where Meulensteen has his biggest headache, though, with the 4-1 home reversal to fellow strugglers Sunderland still fresh in the memory. Fulham have conceded 48 goals in 22 league games this term – 10 more than any other side in the Prem – but the manager might need to reassess his transfer targets.

Championship leaders Leicester have dismissed two bids for centre-back Liam Moore, insisting the England Under-21 international is not for sale, while Tuesday’s opponents have rejected an offer from Fulham for Neil Taylor. The Welshman may be understudy to Ben Davies at left-back, but considering his luck of late, Laudrup is understandably far from keen to lose any of his back-up options.

The injury list is grim reading for Laudrup, with Jonjo Shelvey’s pulled hamstring picked up in the defeat to Spurs seeing him join Michu, Michel Vorm, Jonathan de Guzman, Nathan Dyer, Jose Canas and the non-brick-throwing Monk on the sidelines. De Guzman is the most likely to return against Fulham, with the Dutchman missing three weeks with a calf injury.

For the visitors, John Arne Riise (hamstring) is a doubt after limping off after just 10 minutes of Sunday’s Bramall Lane mudbath, while Fernando Amorebieta is still out with a knee problem.

With last year’s top scorer Michu having missed the last six weeks due to ankle ligament damage, Swansea's record signing has been under pressure to provide the goals, and after a stuttering start to the campaign he’s doing just that – six in his last five games taking his season tally to 16.

“Wilfried has a cool head, you can see how he's finishing his goals, he is playing with confidence," said Laudrup on Saturday. "We talk about the need to adapt on the pitch and it is not easy as a foreign player. I’ve been a foreigner in most of the countries I played in and I understand that. But when you have a big price tag it is about patience and I am happy for him.”

Interestingly, Swansea have only won once in the Premier League when Bony has found the target, but he can hardly be blamed for his side’s defensive frailties (even if the six-footer would make a useful centre-back).

Bony's quickfire brace to see off Birmingham in the FA Cup came on the back of an impressive display in the defeat to Spurs. As FFT's Stats Zone shows, he had twice as many attempts on goal than any player on the pitch, and after rattling the woodwork earlier in the game, finally got his reward after 78 minutes with a cracking volley to beat Hugo Lloris. Unfortunately for the Ivorian, his side were 3-0 down at the time, but if he can keep up his current scoring rate he’ll surely shrug off that ‘king of the consolation’ tag… that we’ve just harshly stamped to him.

It’s the first time the two gaffers have gone head-to-head, although Laudrup with be familiar with Meulensteen from last term, where the Dutchman was Fergie’s assistant at Manchester United.

Having struggled to revive the fortunes of Fulham since replacing Martin Jol in November, Meulensteen was understandably less than enthused with the added bother of a cup rematch next month – especially considering their third-tier opponents played most of the second half with 10 men.

"I'm not happy with a replay. Looking at the second half and the red card you should – as a Premier League team – be able to put the game to bed," he said.

If Meulensteen can oversee victory on Tuesday, it’ll be Fulham’s second win on the bounce at the Liberty, following a Dimitar Berbatov-inspired 3-0 win there in the final game of last season, but the Cottagers did lose 2-1 in their Craven Cottage clash earlier this season.

Bony on the scoresheet once again – and this time it'll really mean something: 3-2.