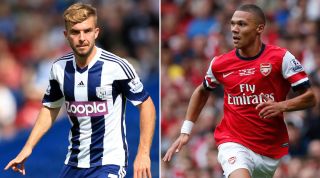 Conquerers of Old Trafford look to claim another big-four pelt.

Come on, hands up. How many of you said Arsenal were doomed after their opening-day defeat to Aston Villa? We don’t believe you.

OK, we’ll afford you one little white lie, but now it’s time to fess up. How many of you expected West Brom to beat Manchester United in their own backyard? Really? Even with David Moyes’ side desperately needing a win? Even, when you consider the Baggies' last win at Old Trafford was in 1978? Still keeping your hands in the air? You’re all fibbers. Not even Mystic Meg could have called this. If Arsenal maintain their form we’ll have run out of superlatives by Christmas.

The Gunners delivered another stirring display in the Champions League on Tuesday – dismantling Napoli with ease at the Emirates Stadium. The north Londoners have now won 10 games on the bounce, including a win over West Brom in the League Cup on penalties. Don’t read too much into that result – the two teams were diluted versions of their regular starting line-ups.

Arsenal’s 2-1 victory over Swansea stretched the club record of consecutive away wins in all competitions to 12, equalling their record of eight in the Premier League.

Steve Clarke’s men are not shy of confidence themselves having humbled United 2-1 and extending their unbeaten run to three.

United were lacklustre, but as Clarke reminded everyone in his post-match interview, West Brom deserve credit for beating the reigning champions on their own turf.

Rio Ferdinand could be forgiven for calling Samaritans at the final whistle, after the hiding Morgan Amalfitano gave him. Saido Berahino, allegedly the world’s poorest footballer earning just £850 per week, played with the freedom of a kid in the playground, not a fresh-faced 20-year-old stepping out at Old Trafford.

To call this a Super Sunday would be generous, but it beats watching Songs of Praise (that said, Turner & Hooch is on Channel 4!).

Like Arsenal, West Brom lead England’s top flight. Unfortunately for them, they top the injury table and not the Premier League. The Baggies have nine players on the sidelines, including Scott Sinclair, James Morrison, Shane Long, Zoltan Gera, Chris Brunt, Matej Vydra, Ben Foster, George Thorne and Nicolas Anelka. But there is a chance Le Sulk will be fit to play against his old club on Sunday.

Arsenal’s Santi Cazorla could be in line for a return to first-team action after an ankle injury.

Needless to say, Clarke will have to come up with a defensive masterplan if he hopes to extinguish Arsenal’s attacking threat. But as his side proved against United, it’s what you do with the ball that really counts.

Assuming Arsenal dominate possession and play most of the game in West Brom’s half, the Baggies will need to be clinical on the counter-attack. Amalfitano has the weaponry to inflict this damage and if Gibbs gets caught too far forward, he’ll have the space.The Arsenal left-back was one of the Gunners’ top ball distributors against Sunderland, finding 65 of his 70 targets. A third of these passes came in attacking third, 90% of which were accurate.

If one of his stray passes, as rare as they are, find their way to Amalfitano he better turn on the afterburners and get back because the Frenchman has an end product – just ask the United defence who watched on as he scored one and made another. And this wasn’t a flash-in-the-pan performance, either. Earlier in the season he put in 14 crosses against Sunderland and 7 against Fulham, 3 of which led to goalscoring opportunities.

On the flip side, West Brom’s wide-man will have to get back and support Liam Ridgewell when Arsenal are on the attack. Gibbs versus Amalfitano promises to be an intriguing touchline tug-of-war.

Arsenal boss Arsene Wenger, celebrating his 17th year in charge, said his side’s 2-0 win over Napoli was “all that you dream to see when you come to watch football.” You can attribute their success to a number of positives out on the pitch, but it’s the man in the dugout who’s masterminded it all. His faith in Olivier Giroud and Aaron Ramsey, and astute transfer dealings, are paying dividends.

When will we all learn? Arsene knows best.

He certainly does when it comes to beating West Brom. The Gunners have won five of their last seven meetings with the West Midlanders. The Baggies last beat Arsenal in 2010 – a 3-2 victory at the Emirates.

Everyone thought Clarke would struggle to replicate last season’s success after Romelu Lukaku returned to Chelsea, but he’s plugged that gap with Victor Anichebe, Stephane Sessegnon, Anelka and Amalfitano. As Clarke showed at Old Trafford, he’s not interested in sitting back – his team have the firepower to be positive and bold and that’s exactly how they’ll approach Sunday’s challenge. Everyone is waiting for the Gunners to revert to type and crumble. This might be the game the doubters get to say: “We knew it wouldn’t last...”

With Mesut Ozil conducting the Gunners' orchestra it’s hard to see anything other than an away win. 2-0.