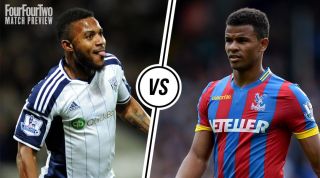 It's an underdog eats underdog world out there...

For a minute, well 21 minutes actually, West Brom must have thought another scalp was in the offing on Monday evening.

Having beaten Spurs 1-0 at White Hart Lane earlier this season, they were leading Manchester United at home 2-1 before Daley Blind popped up with a face-saving equaliser.

Bloodying noses is something that West Brom do rather well at times. When playing the top teams, they show courage and guile; against United they exposed the spaces behind the opposing full-backs to score two impressive goals.

The problem for Alan Irvine's men this weekend is that Crystal Palace hardly constitute a European rival or sleeping giant. Still, the Baggies are on a reassuring run of form, picking up two wins and a draw from their last four games, plus a League Cup win over Hull.

Despite the lack of distance between Palace and their opponents in the table (only one point separates them), there is at least a sense of momentum with West Brom.

Palace have failed to maximise the intimidating crowd atmosphere that epitomised Tony Pulis's brief reign, and they miss his point-saving moxy. Damien Delaney's naive sending off against Chelsea - with Mourinho's side already reduced to 10 men themselves - suggests a lack of composure and common sense.

They'll need all of that here if they're to match their most impressive result of the season - that 3-2 away win against Everton in September. But West Brom will be buoyed by Monday night's impressive result, and under Irvine they have turned The Hawthorns into a castle, much like Palace did last year with Selhurst Park.

For Palace, Scott Dann is still out with a knee ligament injury and expected back at the beginning of November. This situation is given extra weight because of Delaney's suspension. A late call will be made by West Brom on Ben Foster, who missed the United game through a calf complaint picked up in training.

A lot of talk has surrounded the West Brom striker this week regarding a potential England call-up. Truth is, should he continue with his impressive run of form this season, Roy Hodgson will find it hard to ignore him: Berahino has scored six goals already, though he has been ably assisted by the link-up play of Stephane Sessegnon. "His application in training is top class," said Irvine. "He's behaving like a top professional on and off the pitch, and if he keeps doing that he has a great future." Certainly, the way Berahino dispatched his goal against United on Monday suggests a cool head. It will be up to Palace's centre-half Brede Hangeland, now without his defensive partners of Delaney (suspension) and Dann (injury), to stop him.

Irvine was understandably miffed to have missed out on all three points against United. “We’re all bitterly disappointed. We were so close to getting a great result against a top team. For us not to get the three points feels really tough at this moment.

"The players were terrific all the way through... the two goals we got were great goals. We led twice and to be honest I felt quite comfortable on both occasions. We spoke about making changes but I didn’t feel we had to. I felt we were OK.”

Neil Warnock, meanwhile, has been left fuming this week (how very out-of-character) by the refereeing at Selhurst Park for his team's fixture against Chelsea. "It’s difficult for managers when you see players getting away with [tackles], and then your own players getting booked for lesser tackles," he said. "I thought two or three of them should have had bookings. I think that’s just experience, a referee’s got to learn certain things. On another day, another referee would have taken action against Cesc Fabregas and against John Terry too."