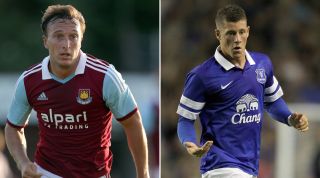 Toffees vs Hammers - the biggest mismatch in football nicknames history since Squirrels vs Elephants.

West Ham and Everton head into Saturday's game sitting snugly beside each other in mid-table (10th and 9th respectively), but their starts to the season couldn't be more contrasting.

Everton are gradually evolving under Roberto Martinez, showing glimpses of an attacking potency that bodes well for the future. Their 23 shots on target to date is bettered only by Manchester City, Arsenal and Swansea, and is a complete contrast to West Ham, who have managed a dire total of just 6 shots on target - comfortably the league's lowest.

It's a telling stat but one that doesn't seem to concern Sam Allardyce, who cited poor finishing as more of an issue than lack of chances created. Either way, West Ham are goalless since the opening day.

Having said that, despite Everton's carefree shooting they've still only managed one more goal than the Hammers' two. Martinez will therefore be delighted to welcome loan signing Romelu Lukaku, who's available to spearhead the attack this weekend. After beating Chelsea last weekend, confidence will be high.

Roberto Martinez has confirmed that Darron Gibson and Arouna Kone could make the squad for this game, while Steven Pienaar is considered 50-50 after missing the 1-0 win over Chelsea through injury. Antolin Alcaraz (hamstring) is out.

Andy Carroll misses out again for West Ham, and with Modibo Maiga continuing to do a passable impression of Carroll by being nowhere near the action, despite playing, Allardyce may consider rejigging his forward line. Might we see Ricardo Vaz Te?

George McCartney, Stewart Downing and Joe Cole are back in training but Saturday's game may come too soon for them. Mladen Petric is lacking full fitness and misses out.

Mark Noble has offered West Ham quiet consistency both defensively and going forward this season: regularly one of the Hammers' best players for tackles per game, ball recoveries, interceptions and passing.

Kevin Nolan may grab headlines but Noble is the funnel through which West Ham's attacking play flows. In all four games the 26-year old has completed more passes than any other player in claret and blue, and against Southampton he was excellent, recovering the ball and beating his man more times than anyone else.

Gareth Barry has only played 90 minutes for Everton but already looks like becoming integral to their play. According to Leighton Baines, City's England internationals 'couldn't believe' he was allowed to leave Eastlands, and his reliable distribution and ability to read the game will come as useful assets to Martinez's side.

One suspects the key to this game could be which of Barry or Noble manages to exert a greater influence.

Big Sam has the upper hand on Martinez in head-to-head battles, winning three of their five meetings and only losing once.

Everton did the double over West Ham last season, winning 2-1 away and 2-0 at home. West Ham can't afford to be losing home games, even at this early stage of the campaign. 1-1.