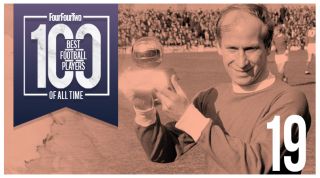 Manchester United’s legendary midfielder enjoyed a hugely successful playing career at Old Trafford, winning three league titles in the 1950s and 1960s. Raised in the north-east, he began as a winger, but morphed into a marauding forward playmaker.

The hours of practice he put in as a child paid rich dividends, and he was able to shoot from prodigious distances with both feet, netting 247 goals in 754 appearances. With his distinctive comb-over, the graceful Charlton wore the No.9 but preferred to drop deep and play behind a more muscular front player.

In the 1960s and early 1970s, Charlton formed the ‘Holy Trinity’ with United legends Denis Law and George Best, as United enjoyed their hitherto most successful era.

Charlton’s aura was palpable. The ‘Busby Babe’ was thrown 40 yards clear of the wreckage in the 1958 Munich air crash, then learned the devastating news that many of his team-mates had perished. The trauma he suffered meant it took him several years to recover his confidence.

The tears he shed when United won the European Cup at Wembley in 1968 were of joy, but also of sadness for the memory of those friends and team-mates who would surely have won the trophy a decade or so before, were it not for the tragedy of Munich.

Charlton was also a key member of the 1966 England World Cup squad. His thunderous finish during a tense group stage defeat of Mexico was described by manager Alf Ramsey as “a wonderful sight for all Englishmen”, and his two crisp finishes in the semi-final against Portugal put England into the World Cup final.

Although he and Franz Beckenbauer effectively cancelled each other out in the final, Charlton richly deserved the glory which came his way in ’66.

His name became a byword for sportsmanship and good manners, and his quiet demeanour was often in marked contrast to that of his curmudgeonly and boisterous brother Jack, also a team-mate in ‘66.

Bobby, who suffered such loss as a young man, will forever be remembered – perhaps more than anything – for those two defining matches at Wembley Stadium which created English football history.

Career highlight
Two years after being stifled in the World Cup final by Beckenbauer’s close attentions, Charlton played a pivotal role in Manchester United’s European Cup final triumph against Benfica. After a quiet first half, he soared to give his team the lead with a rare headed goal, and then, with United already 3-1 up in extra time, provided the final flourish with a quite superb angled finish.