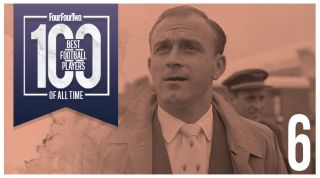 Over a glittering 20-year spell, Di Stefano was the star of three successful teams in three countries.

He’d grown up playing football on the streets of Barracas, a working-class suburb of Buenos Aires, and started out at River Plate. After four years in his home nation he moved to Millonarios from Bogota, Colombia, before winning fame, fortune, and copious amounts of silverware with Real Madrid in the late 1950s and early ‘60s.

Not only was he a superb and versatile centre-forward whose relentless stamina meant he grabbed a huge number of goals late in matches, but like the very best players he could influence play everywhere on the pitch.

“Who is this man? Wherever he is on the field he is in a position to take the ball. You can see his influence on everything that’s happening,” wrote Bobby Charlton after seeing Di Stefano play for Real Madrid in 1957.

The Blond Arrow may not have boasted the natural gifts of players like George Best or Diego Maradona, but Charlton and Franz Beckenbauer, among others, have both stated that Di Stefano was probably the best all-round player to grace football.

After his net-busting exploits helped guide River Plate to the title in 1947, Di Stefano joined Millonarios in the breakaway Colombian league. Since it was outside of FIFA’s remit, Millonarios paid huge wages to their best players – and Di Stefano duly won three league titles in four years in Bogota.

But when Colombia rejoined FIFA in 1953, the lethal frontman headed to Spain.

Real Madrid fought tooth and nail with bitter rivals Barcelona for his signature. In the midst of an acrimonious battle between the giants, the Spanish Football Federation suggested both clubs share the player, but controversially awarded Madrid the first bite at him.

Barcelona officials claimed that Francoist influence was the root cause of the federation’s decision, but were later persuaded to sell their rights to the player anyway.

The Catalan club’s loss was Real Madrid’s almighty gain: four days later, he netted a hat-trick against Barcelona and, with 27 goals, led los Blancos to the Spanish title for the first time in 21 years.

He was often reluctant to share centre stage with some team-mates, including the great Brazilian Didi, who claimed that the Blond Arrow refused to pass to him. Even the great Ferenc Puskas had to dance to Di Stefano’s tune.

On the final day of the league season in 1958/59, with both players level on goals scored, Puskas passed to his team-mate rather than score himself. Nonetheless, the Hungarian said of him: “Di Stefano is the best there has been, or is ever likely to be.”