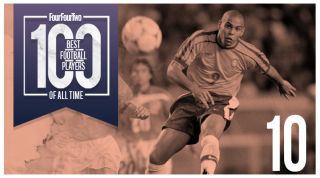 “Did you get that on tape?” Ronaldo asked reporters with a smile on his face after scoring his fifth goal in one 1993 match.

He wasn’t the Brazilian Ronaldo back then. He was known as Ronaldinho and had netted 12 times in his season debut for Cruzeiro, five of them against Bahia, including a masterpiece where he stole the ball from veteran Uruguayan goalkeeper Rodolfo Rodriguez and rolled it into the empty net. Back then, he might not have known that he would get lots of these moments on tape.

More accurately, 420 goals throughout his career.

Ronaldo was just 16 when he broke into Cruzeiro’s first team. He joined PSV Eindhoven one year later, having been called up for Brazil's World Cup squad in 1994 and advised by Romario, who had also started his European journey at the Dutch side.

O Baixinho ('the Shorty'), as Romario was known, took the teenager under his wing during the tournament and promised that he would do everything he could to help him play in the competition. Romario even complained to the media that Brazil should line up with three forwards instead of two.

Ronaldo didn't play at USA 94, but if there was any doubts about how far he could go, they didn't last long.

The bald-headed, gap-toothed kid’s place in the pantheon of modern greats is now secure. He won his first FIFA World Player of the Year award at the tender age of 20 in 1996, went on to become the second footballer to be honoured three times, claimed the Ballon d'Or twice and became the World Cup’s greatest scorer in 2006 with his 15th strike (since surpassed by Miroslav Klose in 2014).

Before that, Barcelona paid a record fee of £19.5m for his services in 1996. Has there ever been a more impressive debut season for a club anywhere in the world? The Brazilian scored 47 goals in 51 matches as the Catalans won the Copa del Rey and UEFA Cup Winners’ Cup, and narrowly missed out on La Liga.

When he demolished Compostela by scoring his most famous goal against them in the same season, Barcelona boss Bobby Robson looked like he couldn't cope with seeing such brilliance from a forward who'd only turned 20 a month earlier.

Barcelona couldn't hang on to him for long, though. Ronaldo signed for Inter in 1997 and was the star attraction at the 1998 World Cup, where he won the Golden Ball and finished with four goals. Yet the last chapter infamously didn't go as planned: he suffered a fit before the final against France and failed to perform after he was eventually named in the starting line-up, as Brazil lost 3-0 to the hosts.

Unfortunately, his trials didn’t stop there: throughout his career, Ronaldo's frightening pace and acceleration were threatened by injuries. Many thought his football career was doomed after his troubled right knee imploded in the Coppa Italia final against Lazio in 2000.

He was out of the game for 15 months after undergoing new surgery, and made one of the greatest comebacks in football history. Arriving at Japan and South Korea 2002, he left his demons from 1998 behind to guide Brazil to World Cup No.5, top scoring in the tournament with eight goals.

He signed for Real Madrid that summer and showed tantalising glimpses of his best form as one of the galacticos. Yet Ronaldo was never quite the same again and retired in 2011 – still scoring goals, but with his game necessarily reinvented thanks to his loose lifestyle and dodgy knees.

Career highlight
His brace in the 2002 World Cup Final for Brazil against Germany sealed one of the game’s greatest comeback tales.