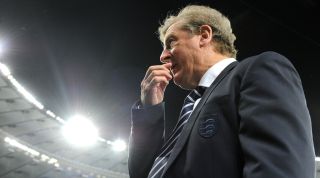 So England have qualified for Brazil 2014, in case you hadn't noticed. But who should be on the plane? Roy Hodgson won't have to decide until late May, but FourFourTwo names the men who would make it if the tournament started in a fortnight…

England's undisputed No.1, despite the recent bad press. It'll take a lot for that to change before next summer.

Champions League football gives him the edge over his rivals for the No.13 jersey.

The 26-year-old has made a couple of blunders of his own of late, but with Ben Foster out for another six weeks, he keeps his place… for now.

His needless yellow card against Montenegro underlines why he's a risk. In the box seat for now, but in danger.

Soon to return to training, and it won't be long before he's breathing down Walker's neck.

On current form, he edges ahead of Ashley Cole in the battle for the left-back spot.

The knock that saw the veteran miss the Montenegro and Poland games won't keep him out of this squad - but he'll have a job on to overtake Baines.

Still has his doubters at the very top level but his burgeoning partnership with Cahill should keep him in the squad.

Needs to work on eliminating mistakes but his pace and recovery are essential at the heart of England's defence.

His versatility gives him an edge over some of his rivals, but retaining his place at United will be key.

Again, versatile – although he hardly stole the show at right-back – but somewhat unproven, and could do with regular first-team football.

The skipper may not be in the form of his life but has started the season well at club level, and has much needed experience and composure.

As good a passer as England have at their disposal; his assurance in possession could be useful against the very best teams.

Big call to leave him out of the XI against Poland but he was the first sub Hodgson turned to. Again, his experience will be seen as essential.

Like a few in this squad, he needs a good settled season - but he's more likely than most to be on the plane.

Thrillingly direct new boy adds pace and penetration. Needs to mesh with team-mates but Hodgson will be happy.

Townsend's arrival won't make Hodgson forget his other speedy wide option, who would also love to be considered an option up front.

Has had his critics for club and country, but England are hardly hip-deep in suitable midfielders - and he could also play deeper if need be.

Never the golden boy, always the errand boy, Milner will cheerfully plug any gap he's told to with more than a modicum of tactical sense.

Although Wayne Rooney is still certain to be accommodated, Sturridge's club form in 2013 makes him a 'must pick'.

The fact he scored the crucial opener in both of England’s final two qualifiers shows he’s still their talisman. Improving club form a bonus.

Still needs more composure in front of goal but his versatility and use of the ball make it doubtful that he will be dropped.

Hodgson will want a target-man option, but Lambert may face a battle for his club spot and Andy Carroll is always looming.

Knocking on the door

Hodgson has said he will look to use the upcoming friendlies to give younger players a chance, and among those looking to edge their way into the 23 will be Everton's Ross Barkley, Arsenal's Alex Oxlade-Chamberlain and Southampton's Nathaniel Clyne - while West Ham's Ravel Morrison threatens to fulfil his potential, and England's lack of depth at centre-back gives hope to Cardiff's Steven Caulker.

Although Hodgson respects experience - witness his central midfield choices in these two crunch games - he may also want to counterbalance that (and fulfil his long-term FA remit of youth development) with younger back-ups. This is not good news for Manchester United's Ashley Young (28), Fulham's Scott Parker (33) and Manchester City's Joleon Lescott (31).