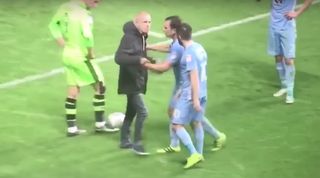 Promotion-chasing Coventry lost their League Two contest 1-0 against bottom side Forest Green on Tuesday night, much to the dismay of the home supporters.

This particular fan was so incensed that he boldly decided to climb over the advertising hoardings, casually stroll onto the pitch and confront striker Marc McNulty near the corner flag. Captain Michael Doyle stepped in to try to act as peace-maker/bouncer.

Eventually, after an unhealthy amount of shouting and gesticulating, the raging supporter was escorted off the pitch and is now being investigated by the West Midlands police.