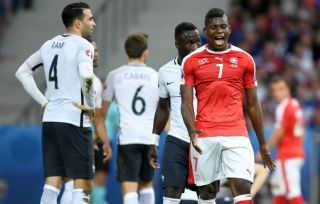 Back in January, Wolfsburg were so interested in Breel Embolo that they tabled a €27million bid for the striker, which was rejected. Embolo's reaction to their offer was truly remarkable. "I am not worth that money," he said, and chose to remain at Basel until the end of the season.

That sums up the Cameroon-born sensation. Embolo bursted onto the scene two years ago, catching the eye with his brilliant dribbling and physical force which led to (then favourable) comparisons with a young Mario Balotelli.

In reality, he could barely be further from the troubled Italian, whose career has fallen apart spectacularly thanks to his problematic character. The Basel star is down to earth, humble and honest – a player trying his best to keep his feet on the ground to fulfill his potential.

An incident against Grasshoppers last November magnified his character. With Basel trailing 3-2 with five minutes left, Taulant Xhaka’s fired shot hit Embolo and went out of play. The referee awarded a corner but the striker told him that he'd made a mistake. The decision was reversed, and Basel eventually lost.

Embolo’s honest actions that day made him more popular, but his talent has been making headlines since his debut in 2014. A late substitute appearance in the game against Aarau in March that year saw him net his first career goal. Immediately, all of Embolo’s team-mates ran over to congratulate the youngster.

It is somewhat bizarre, therefore, that Basel almost missed out on the prodigy – not once, but twice. Aged 10, Embolo was discarded by the club after failing several tests and moved to Old Boys. Two years later, after proving his worth at a lower level, he was back at Basel – but the striker was far from happy.

"It was all way too strict for me. Everything was planned and structured. I missed my friends too. That's why I told my mother that it was not for me," Embolo recently recalled in an interview to Aargauer Zeitung.

He went back to Old Boys for a second stint, but it took him just two months to understand the grave mistake he'd made. He returned to Basel and has been the club's jewel ever since, first for the academy and now in the senior squad.

For a while, questions remained over Embolo's international future. He arrived in Switzerland at the age of six, and thus could easily have chosen Cameroon as his national team, despite representing the former at youth level. But the decision to commit to Switzerland at the beginning of 2015 was greeted with huge enthusiasm by fans and pundits alike.

Embolo was voted the Most Popular Player in Switzerland in both 2014 and 2015, and was awarded Player of the Year last term. And yet, such fame hasn't changed him.

Just as Basel celebrated their title win a year ago, Embolo called Raphael Wicky, coach of the club's under-18 team, and asked him if he could play the remaining games of the season for them. His love for football is undisputed; he won’t go a day without training in order to improve his ability.

Basel's players have always loved Embolo. Veteran striker Marco Streller, who retired in 2015, took the youngster under his wing and constantly worked with him during training. "He is a huge talent. I am excited to see him every time he plays," Streller said.

Those feelings are shared by everyone, and Embolo's personality means his chances of developing into a world-class star are considered higher. As midfielder Fabian Frei put it: "Embolo will never score from 40 metres, simply because he would never attempt that."

Embolo is not a typical centre-forward, even though he is strong enough to take on anyone who challenges him. Furthermore, he’s a lot more versatile than people think. His dribbling skills make him a useful winger and his endless tank of stamina makes him into an excellent dictator of play in the middle of the park.

The statistics speak for themselves – Embolo has scored 30 goals in 90 matches in all competitions for Basel, and provided another 22.

Those are excellent numbers for the rising star who will celebrate his 20th birthday next February, making it easy to understand why Manchester United had reportedly made Embolo one of their top transfer target this summer. If reports are to believed, however, Schalke all but landed their man on Wednesday.

RTS commentator David Lemos can see a very bright future for Embolo. "Youth national team coaches were raving about him for a long time," he tells FFT. "Breel is seen as a striker these days, but he is able to play anywhere in midfield too.

"He has got pace and power with the ball, but also without it. His ability to recycle possession is amazing and in that respect, he reminds me of N'Golo Kante. He can dictate the tempo of the game and it's a shame to only use him up front."

At the same time, Lemos believes Embolo can become a very prominent predator in front of goal: "If he starts focusing all his energy on scoring goals, he will be truly unstoppable. With his intelligence and calmness, he has everything to become an amazing player. He just needs the right coach at the next level."

That is the most intriguing question now. Would Jose Mourinho really have been the right one for him at this stage of his career anyway? Or is he right to develop his skills at a club of Schalke's calibre first? The decision is imminent but in the meantime, he is waiting to make his mark at Euro 2016.