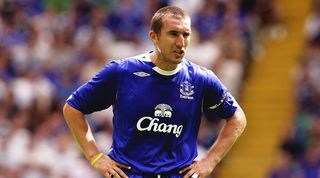 Former Celtic defender Alan Stubbs has told FourFourTwo how grateful he was towards the Glaswegian club and particularly manager Martin O'Neill, after the club leant him their support when an opportunity arose to join boyhood club Everton, following a fight with cancer.

Stubbs was first diagnosed with testicular cancer in 1999, when a routine drugs test showed an abnormal hormone level. The defender was given two courses of chemotherapy after further tests found a lump at the base of his spine, and missed the majority of Celtic's 2000/01 title-winning season as a result.

When the opportunity arose to move to Everton, however, Stubbs tells FFT that O'Neill did everything he could to help his player.

"All the support I had – not just from Celtic fans but the whole community, including Rangers fans – was so humbling," Stubbs said, speaking in the Summer 2020 issue of FourFourTwo, available online and in shops now. "When I found out that Everton were interested, Martin [O'Neill] said, 'Don’t worry about it – there’s a three-year contract for you there, so go and speak to Everton. If that’s not what you want, a new deal will be here for you.'"

"That’s the mark of Martin – not just the manager but Martin the man. It meant an awful lot to hear that."

"But after everything that had happened, I felt like I couldn’t turn Everton down. As a kid, standing on a crate at the Gwladys Street End, I dreamed about playing for them."

Stubbs did join Everton on a free transfer in the first of two spells at the club, while O'Neill led the Bhoys to a UEFA Cup final in 2003. Stubbs was a big hit with the Toffees and even coached with the club.

Now, the former player admits that he didn't realise the severity of his fight with cancer and calls his attitude towards the episode "a bit naive".

"My first thought was, ‘Will I play football again?’ I didn’t think I was going to die for one second," Stubbs said.

"Looking back now, it was probably because footballers believe they’re invincible. Afterwards, I asked a nurse if I could have died in the operating theatre and she told me, “Yes, 100 per cent.”"

"That’s when the severity of the situation really hit me."

Read the full interview with Alan Stubbs in the Summer 2020 issue of FourFourTwo magazine, available in shops and online from now. Our new magazine looks at the 99 things you’ve forgotten about the noughties, from battles to beach balls, looking at the decade that revolutionised the game as we know it; we examine the golden generation and where it went wrong for England, look over the extraordinary decade of Thierry Henry, remember the fall of ITV Digital, the highs and lows of Harchester United - the fictional side from Sky’s popular drama Dream Team - and look at the formidable partnership of Kaka and Andriy Shevencko over in Milan. We also chat to Jerzy Dudek, Mikael Silvestre, Fredi Kanoute and Jimmy Floyd Hasselbaink.