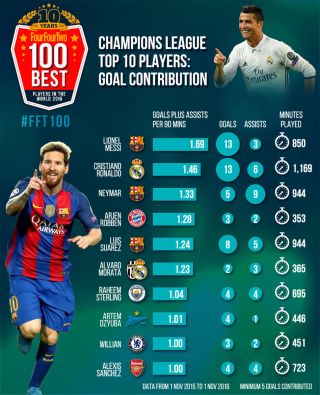 We're now into the business end of our countdown of the world's 100 best footballers – but don't worry, there's still plenty more to come.

Including stuff like this: our latest infographic, detailing the scariest Champions League frontmen over the last 12 months. We've looked at goals, assists and minutes played to bring you an overall record per 90 minutes of contributed net-ripplers (with a minimum of five to be considered here).

After you're done scrutinising, check out our others below: