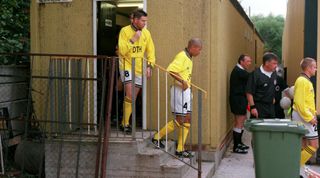 Not every big-name footballer bows out at the top.

For every Zinedine Zidane who goes out at the summit with, err, a bang, there's a player who keeps the dream going by turning out for - with the greatest of respect - less glamorous sides in the lower leagues.

Just 10 years after penning a huge contract with Italian giants Lazio, Gascoigne was signing a new lucrative deal...with League Two Boston United. Mis-hitting a shot into the face of a small girl who was Boston’s mascot for the day on his debut, he left after five league games, partly because the club wouldn’t let him participate in I’m a Celebrity, and partly so he could pursue his management career. Sadly for Gazza, that career started and ended with a 39-day spell at Kettering. On leaving Boston, Gascoigne stated: “I have left on good terms, shaking hands with [manager] Steve Evans”, perhaps in part explaining his lack of job offers since.

When the man who Pele described as ‘the greatest’ left Manchester United as a 28-year old, he began a nomadic existence - with spells for clubs in South Africa, Hong Kong and the USA, among others - before ending his professional career in Division Three with Bournemouth. Playing five games at the end of the 1982-83 season, his final ever professional game was against Wigan, with the match day programme featuring an interview with Best in which he states he was enjoying life on the south-coast, though quite how he felt about the interviewer labeling him as “..the portly 36-year-old” will remain unknown.

N’Gotty’s former sides include Marseille, PSG and Milan, but after nine years in England, having initially arrived in England with Bolton Wanderers in 2001, he eventually wound up on loan at League One relegation battlers Hereford United, via Birmingham and Leicester. He made his international debut on the same day as Zinedine Zidane and Lilian Thuram, but while Zizou scored three World Cup final goals and Thuram became France’s most capped player, N’Gotty’s professional career ended with a ruptured Achilles playing for the Bulls at Peterborough in 2008.

After a successful career playing for the likes of Juventus, Fiorentina and Benfica, pint-sized forward Miccoli finally found a home at Sicilian club Palermo. Adored by the fans, the Italian international netted 74 goals in 165 games as the Rosonero challenged for Europe for the majority of his seven years in the city. However, in 2013 he was caught negotiating with the mafia and called murdered mafia investigator Giovanni Falcone ‘filth’. Miccoli said he needed to be “reborn and stop being so stupid”, deciding to do so in Italy’s third-tier at hometown side Lecce.

After declaring he could “never play for Manchester United”, striker Smith joined the Red Devils from arch rivals Leeds in 2004. An England squad regular, he netted on his Manchester United debut in the Community Shield, but could only add six more goals to his tally, eventually being converted into a midfielder by Sir Alex. Smith was on the end of a tongue lashing from Roy Keane in the infamous MUTV interview after a 4-1 defeat at Middlesbrough, with the Irishman describing Smith as “wandering around and not knowing what he was doing”. Smith moved soon after, first to Newcastle, then MK Dons and most recently Notts County.

One of the most gifted players of his generation, Waddle won 62 England caps and became a legend at almost every club he played for, including Newcastle, Tottenham, Marseille and Sheffield Wednesday. At 39, Waddle signed for Worksop Town in the Unibond Premier, and on his debut against Runcorn promptly smashed a car window with a wayward shot. Of his spell in Nottinghamshire, Waddle remembers: “I’d sell a defender a couple of dummies, but get clattered because the defender hadn’t read the first one!”

Full-back Birindelli played 11 seasons for Juventus, winning four titles and reaching a Champions League final with the Turin giants. After staying with the club after a Calciopoli-imposed season in Serie B, the Juve legend planned to end his career at hometown club Pisa in Serie B. After his boyhood heroes were struck by relegation and bankruptcy, Birindelli moved on again, this time joining Valle del Giovenco of Serie C, declaring “I was convinced by the owner's ambition”. After lumbering around Italian villages for a year, it was deja-vu for Birindelli as his club were again relegated and declared bankrupt. Sensibly, Birindelli retired.

In his prime during the mid-00s, the diminutive Frenchman was one of Europe’s most dangerous wingers, playing for Monaco, Barcelona, Roma and PSG. After spells back at Monaco and then Lorient, Giuly signed for hometown side and fourth-tier minnows Monts d’Or Azergues, who play at the handily named Stade Ludovic Giuly. “I wanted to feel like a kid again” said the Champions League winner upon signing, before leading his new club to the last 32 of the French Cup, where they were beaten 3-0 by Monaco in a game that saw Radamel Falcao suffer the injury that forced him to miss the 2014 World Cup.

The modern teenager will see ‘Merse’ as little more than a bumbling TV pundit who struggles to pronounce any foreign name containing more than one syllable, but Merson was once one of England’s most creative players. After being sacked as manager of Walsall in 2006, the former Arsenal, Middlesbrough and Villa star offered to play for his friend Mark Cooper at Tamworth in the Conference. He told FourFourTwo: “We went one down in the first minute of my first game and I thought ‘What am I doing here?’”. After losing the next game 5-0, Merson promptly retired to concentrate on making Charlie Nicholas sound eloquent.

After spending his entire career in the top flight with Tottenham, Arsenal and Portsmouth, Campbell was without a club for the start of the 2009/10 season. When Notts County Director of Football Sven-Goran Eriksson offered him a five-year deal worth £40,000-a-week to join the League Two side, the defender signed up for the ambitious project fronted by the mysterious Munto Finance. Days after making his debut in a 2-1 defeat by Morecambe, Campbell walked out of training and tore up his contract, citing broken promises which included Roberto Mancini taking over as coach, and stars such as Roberto Carlos and Benjani joining the playing staff. On suggestions he couldn’t cope with life in League Two, Campbell retorted: “Remember I used to be at Portsmouth, have you seen Fratton Park?”