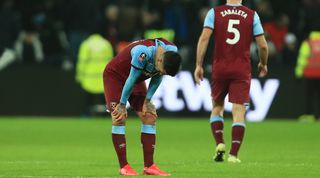 In the UK on Sunday, football supporters woke up to a blistering segment on Sky Sports’ Sunday Supplement, in which The Telegraph’s Matt Law and The Guardian’s Jonathan Liew took aim at West Ham.

It was good television. It was also unusual because the deeper issues at West Ham are rarely discussed, with debate generally limited to the problems with the first team and the head coach. While those issues are hardly irrelevant, they’ve always seemed more like a symptom than a cause under the current ownership and, as such, really beside the point.

"It's just a shambles, an absolute shambles. If they were to go down, that club could just fall apart."@Matt_Law_DT gives a scathing assessment on the current situation at West Ham.

On Saturday, David Moyes’ side suffered fresh humiliation in the FA Cup, losing 0-1 to Slaven Bilic’s West Bromwich Albion. As dire as the performance was, the symbolism was worse. Bilic may yet take his new club back to the Premier League. His former employers, however, bereft of ideas and increasingly short of options, have just rotated back to the man who replaced him.

As a metaphor for their ideological inertia, that will take some surpassing.

Unfortunately, this propensity to bounce between half-baked ideas is very much the club's modern way. Supporters are often accused of guarding their team’s identity too zealously, but at West Ham there's definitely the sense of something having been squandered.

In fact, fans' loyalty to those ethereal definitions should never be mocked. True, many of them view their club in a hopelessly idealised way – see Liverpool’s self-determination as a plucky underdog, for instance – but that doesn’t mean that those qualities are entirely illusory or that they shouldn't be defended.

In West Ham’s case, there are definitely footballing virtues that suit the club’s culture. Admittedly, they’re different from those established in the 1960s and 1970s, but even as recently as the 1990s there existed a quintessentially West Ham performance. Describing that is difficult, but most would know it if they saw it. Tough in the tackle, horrible to play against, but still imbued with flecks of flair; maybe that was an impression formed by the physical confines of Upton Park. Whatever the cause, it perpetuated something which looked and felt right. Something, ultimately, which has been replaced by a general vacuity.

It’s important to be historically accurate. The current owners did not begin this process. Terry Brown was still chairman until 2006 and the appointments of Glenn Roeder and Alan Pardew don’t bear much scrutiny. In each instance, for different reasons, the effect was to dilute West Ham’s personality.

But since 2010, that watering down has continued. Structurally, by the move away from Upton Park, but for many years before that too, with appointments destined to challenge the subliminal qualities which supporters identified with.

It’s not that West Ham should always just be a cluster of East End cliches, but – equally – they obviously didn’t suit the machine-breaking of Sam Allardyce either. Or whatever it was that Avram Grant represented. Or Manuel Pellegrini, another separate circle on any Venn Diagram.

Or David Moyes now. Or the dozens of players who have bounced in and out of the club during those respective cycles.

These are not fashionable arguments to make. Football is a game of money now and of dispassionate analysis, so implying the relevance of any sort of soul seems out of touch. But while it may be an outmoded concept, it's to West Ham's obvious detriment that they have never represented less than they do right now. And, quite clearly, the cause of that recession is the disrespect that has continuously been shown to their culture.

What is West Ham? What is the club as a concept? It's very difficult to answer that, but very few decisions over the last decade seem to have been made with that question in mind. And that's the problem: the lack of such consideration.

Perhaps that’s also this ownership’s greatest mistake? Viewing their tenure as a whole, you could be forgiven for thinking that they never really wanted to own West Ham at all. They wanted a football club and to see it rise smoothly up the Premier League, they were even willing to spend a huge amount of money towards achieving that aim. But they were targeting an unbranded sort of success, something which was washed clean of all the old associations.

The stadium had to go, to be replaced by a venue with all the gravity of a Meccano set. Big, vacant and detached. It’s hard to think of a more unlikely place for West Ham to play, or somewhere less capable of hothousing Upton Park's precious intangibles.

What of the head coaches, too? Bilic aside, where have the synergies been? Where is the understanding that philosophical alignment bonds every great partnership in the game and that clubs and coaches either have to share personalities, ambitions or - ideally - both.

The same accusation stands for those dozens and dozens of transient players, too. The archetype of the West Ham footballer used to be so different, as did the personality of those teams. It would be a Joe Cole here, a Michael Hughes there, and an unlikely gang of Di Canios, Lomases, and the occasional Carrick or Ferdinand somewhere in between. It was a strange little jigsaw, but it worked - some of the pieces needed to be banged down, but it was deferential to its public and somehow, in that mysterious way that fans embolden teams, stronger as a result.

Now, it's a side built out of arranged marriages. They're footballers who don't look quite right in the shirt. They sound good in theory and are worth their investment in a literal sense, but they don’t logically belong at the club and, as a result, can’t be expected to steward its reputation.

Call this what it is, then: a tax on being superficial. It's the consequence of being in thrall to the best player, the biggest name, and the most financially opulent scenario, and never considering that a football club might draw its energy from something more subtle.

And there are very few instances where this has proven to be a successful strategy. When new owners are wealthy enough to knock a club down and build an entirely different one in its place, they're able to make the game’s history seem like a quaint irrelevance. But in more ordinary situations, it matters. It's hard to say why but it does and football tends to punish those who think they know better or who are so fixated on where they want to go, that they lose sight of who they are.