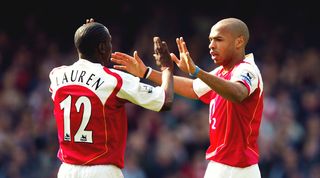 Lauren signed for the Gunners in 2000 after a move to Roma fell through and ended up lifting two titles and three FA Cups in North London. He was a key member of the side that went unbeaten for 49 Premier League games, as Arsene Wenger converted him from more of a midfield role into a right-back.

Speaking in the Season Preview issue of FourFourTwo magazine, out now, the Cameroonian said that the reason Wenger got the best out of his squad was down to a mix of ability and mentality.

"We managed to combine quality and ability with ambition and commitment, so everyone played at their very best," Lauren said. "Dennis Bergkamp, Freddie Ljungberg, Patrick Vieira, Robert Pires, Thierry Henry, Jens Lehmann – they were all players at the top of their game. Even I was playing at my best!

"We had some big players, but Arsene Wenger was the leader and the one who coordinated that immense talent. Therefore, we were able to achieve so much success during that period."

Lauren leaving Arsenal coincided with the club's move to a different style, with Wenger choosing to build around the up and coming Cesc Fabregas. Lauren, however, moved to Portsmouth, where he won one more FA Cup before returning to Spain, the country that he spent much of his youth in.

A highly physical defender, capable of covering a lot of ground and delivering killer balls, the right-back game typified the era of Arsenal in which they consistently challenged for titles. Lauren was a member of the last Arsenal squad to lift an English title - one that he felt was an extremely competitive selection of players.

"There was so much quality on show, but we were also competitive at the training ground," Lauren continued. "Sometimes we’d play four vs four or eight vs eight for possession and finishing drills, and you wouldn’t have wanted to be the referee. We argued with each other all the time, but in a nice way."

"That was because we wanted to win – we wanted to make history. Learning from those players, I desperately wanted to be on the same level. You couldn’t fall asleep."

"When you won a match, you were instantly thinking about the next one. Everyone inside that Arsenal dressing room kept wanting to be the very best."

The FourFourTwo 2020/21 Season Preview issue is available in shops and online now.